The aim of this project was to create a workshop focused on the needs of several public spaces in Bucharest. While having to deal with fundamental problems, Bucharest leaves most of its small, apparently insignificant public spaces behind. These spaces are not completly forgotten though. The way in witch random passer-bys interact with these spots gives us an inside of how they should transform. The process is almost like a series of generated iterations. 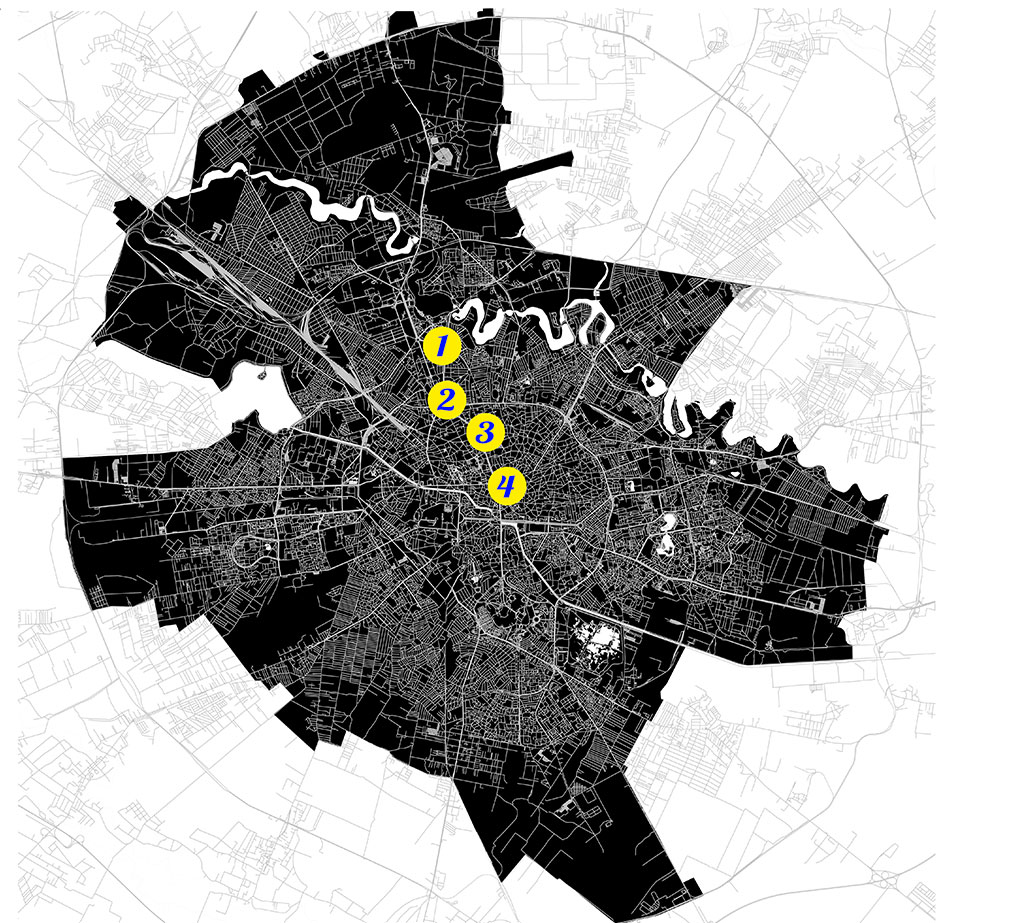 Romania is a young country with a vague culture of public space. If we look at the series of policy changes that took place over the last decades we can observe different stages in the development of cities.
The cities today face many issues. The main issue is the fulfillment of basic needs. This fact leads to a low quality of public spaces.
The public space in Bucharest is characterized by inconsistencies and discontinuities. This provides, among other things, a unique character, which is why we want to understand it better. We want to investigate the residual function of public space, its qualities and how it can be improved.
The public spaces that we focus on are mainly in the downtown area – they follow the North-South axis linking Charles de Gaulle Square and Youth Park. This spaces have a small degree of social conviviality and are often ineffective or incomplete.
We intend to make a few interventions that can function as landmark sites. By doing this we try to improve the quality of a place significantly and remedy existing dysfunctions. 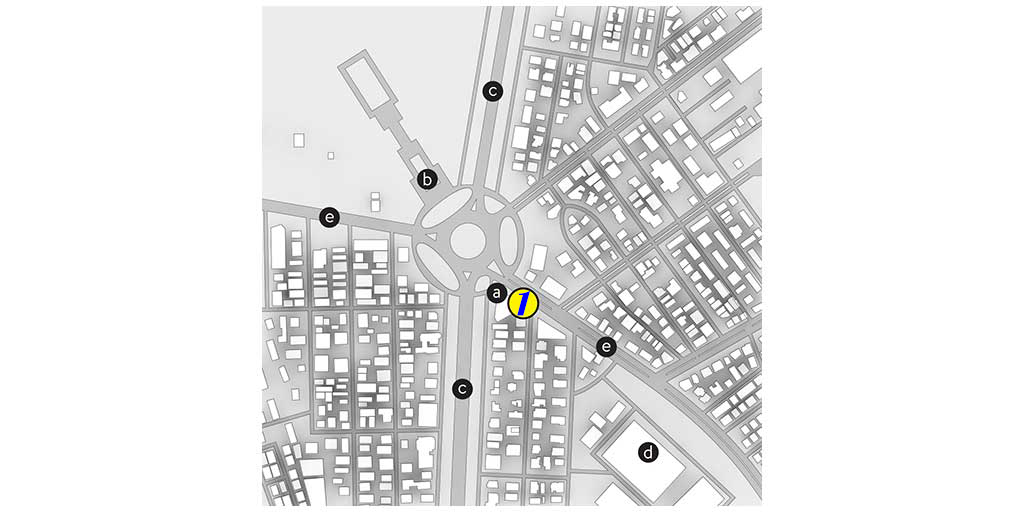 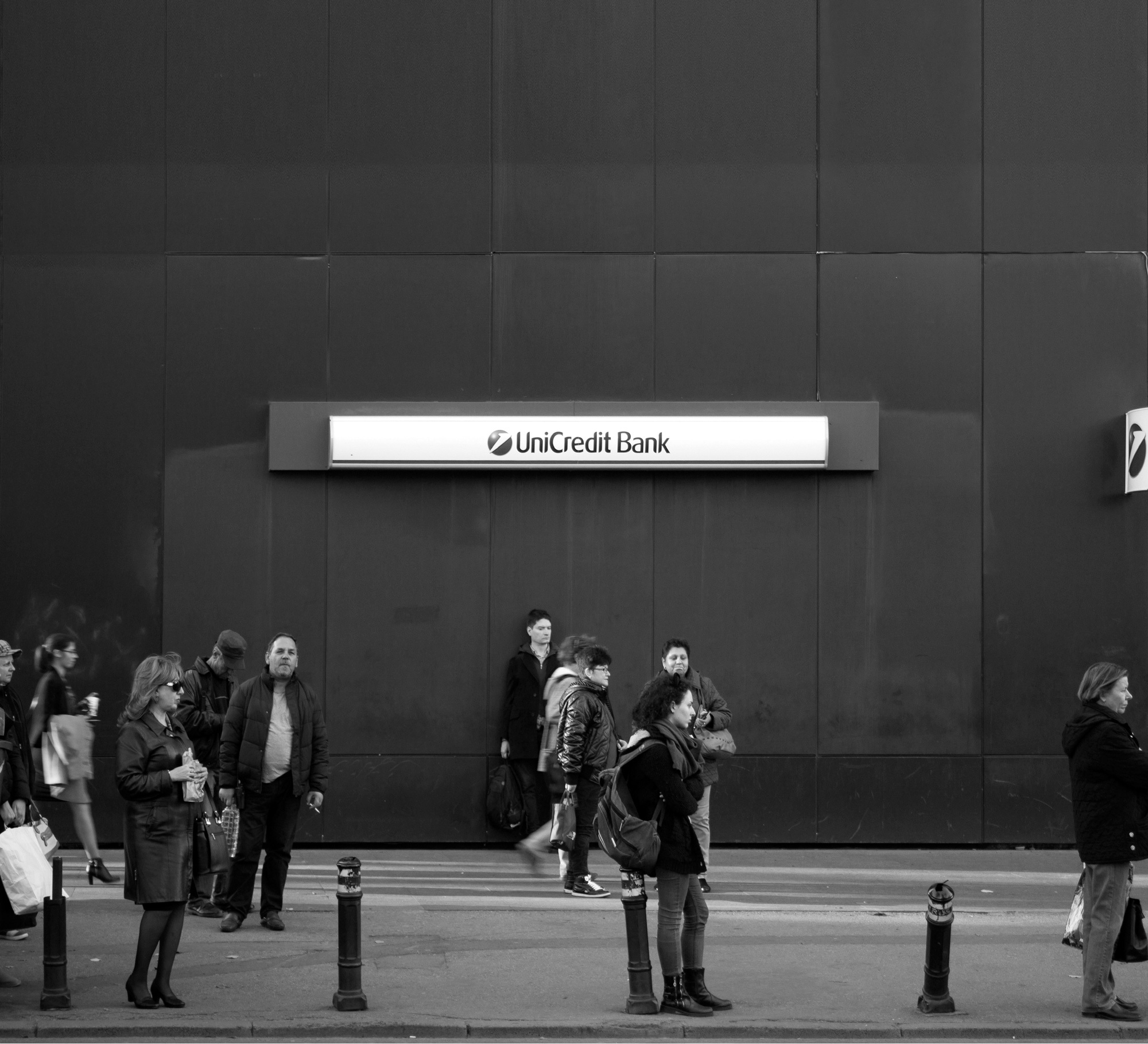 One of the major transportation hubs of Bucharest, Piata Charles de Gaulle is characterized by a large flow of traffic.
The site we chose for one of the proposals is next to the office building ’Charles de Gaulle Plaza’ in front of the bus stop that leads to Bucharest’s city centre. The bus shelter faces a common issue often met throughout other similar spaces - namely the small number of seating areas in accordance with the number of users.
In this particular case the lack of seating areas makes the nearby office building wall a place to rest while people wait for the bus. This is visible by analyzing the wall’s damaged finish.
In terms of user profile we find many corporate employees during the week (due to nearby office buildings) and families on weekends (due to the nearby park).
Our proposal encompasses ways to make the place more attractive and user friendly. 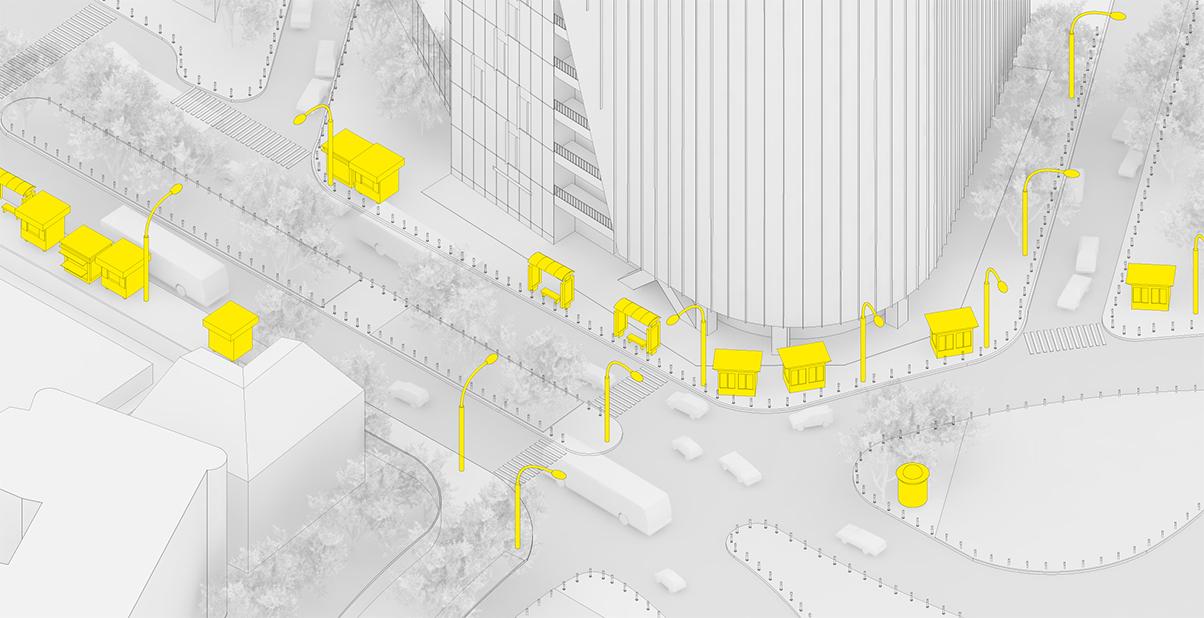 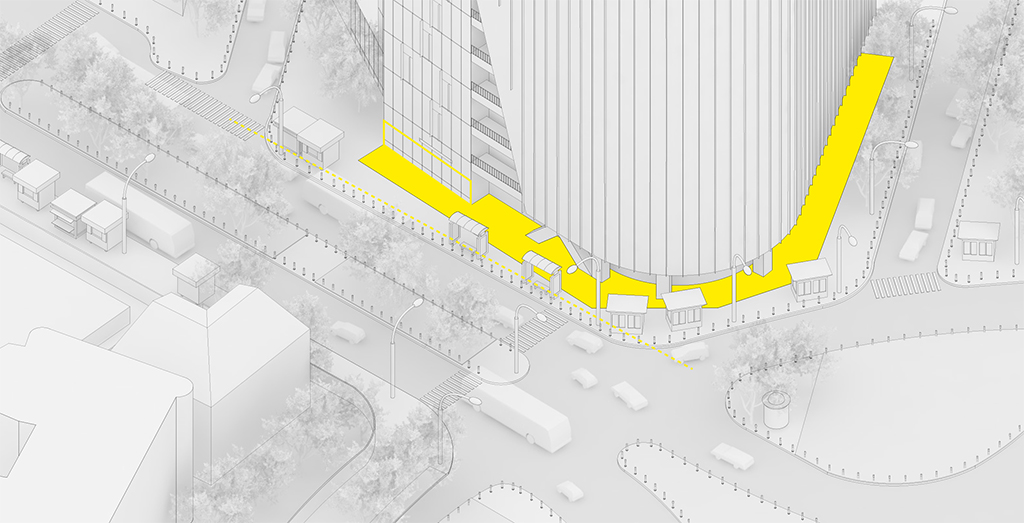 The abundance of street furniture offers little to the user in terms of quality. The elements are strictly functional and often fail to relate with the passerby.
Various paving types are alternated, fragmentating the sidewalk by creating a form of discontinuity. 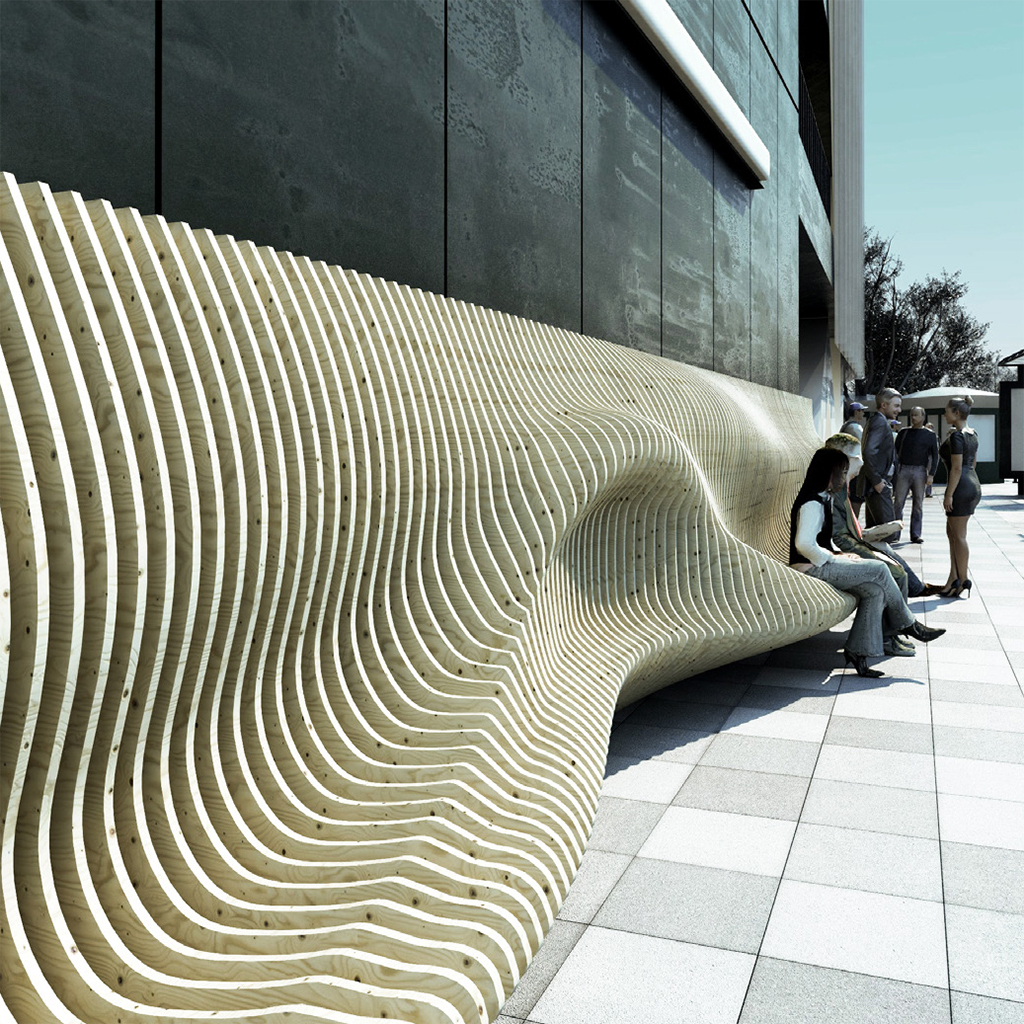 A sequence of boards of various sizes and shapes generates an object. This creates different scenarios for seating.
The object resembles the playful motion of a wave inviting people to sit and wait for the the next ride. 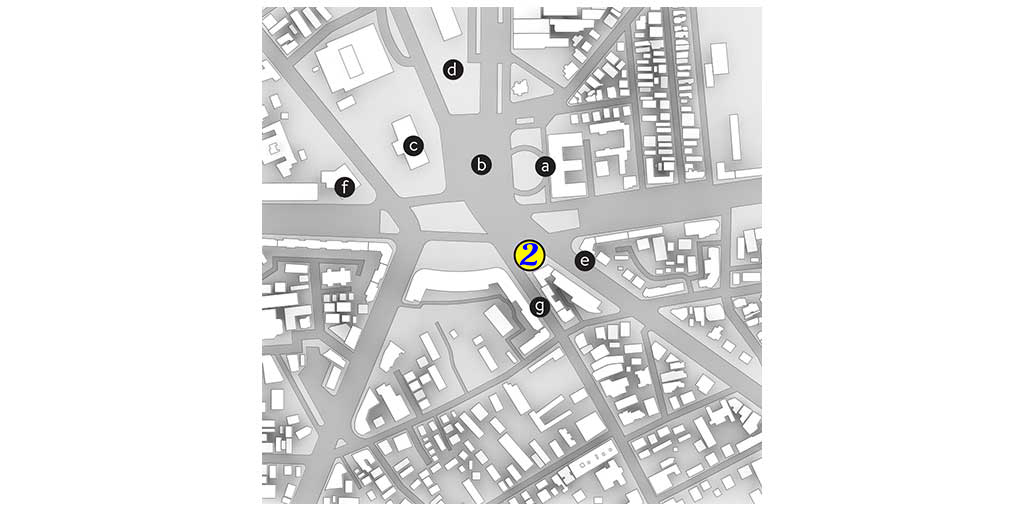 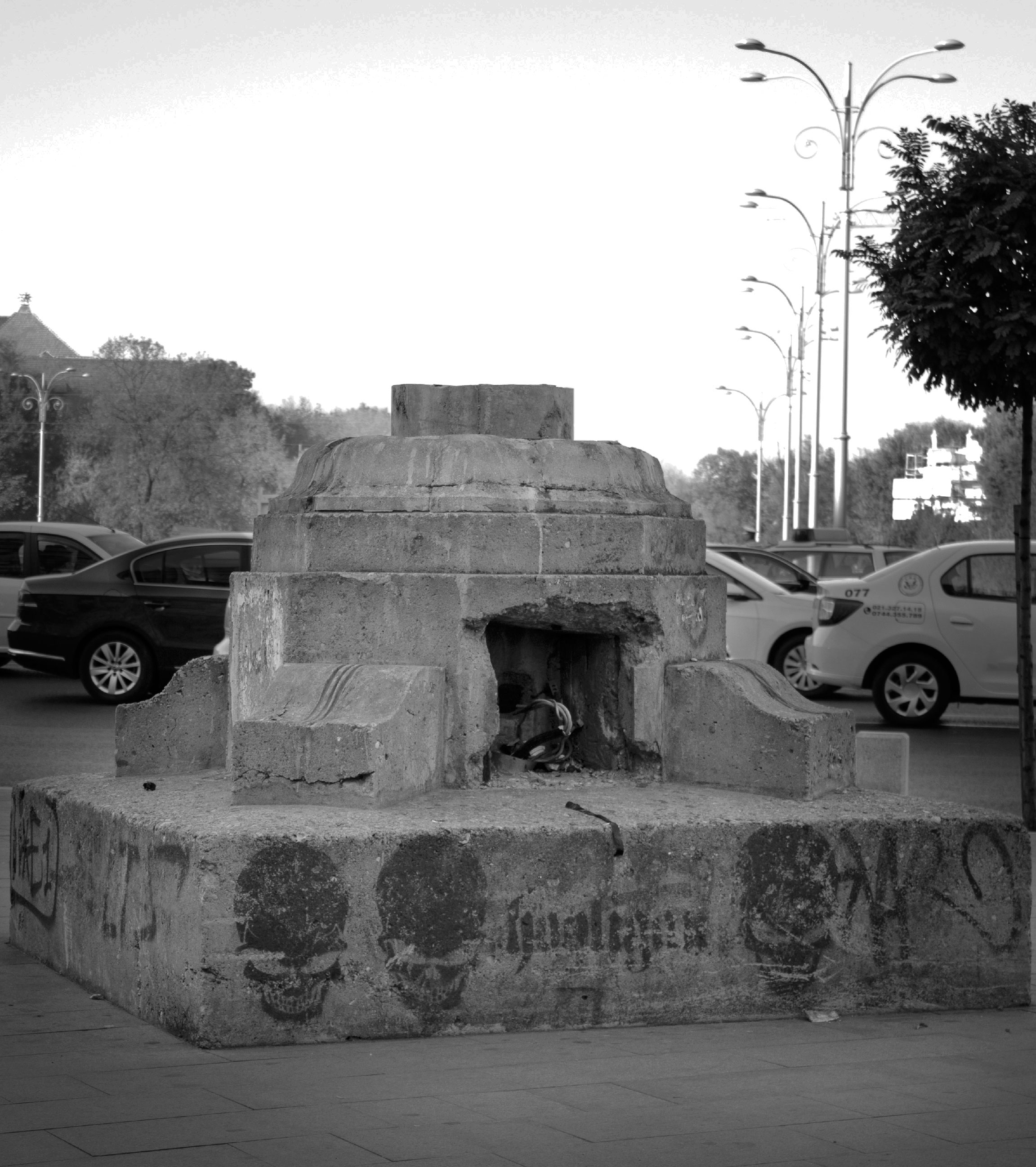 Probably the busiest intersection in Bucharest is Victory Square - an important transportation hub. The site is located at the crossroad of Victoria Avenue and Boulevard Lascar Catargiu.
The object that caught our attention is a reinforced concrete base which dates back to the socialist period. The lighting pole was cut down but the base remained a witness to those times.
What is noteworthy is this object's position - in the middle of one of the major pedestrians flows in the square. In addition it is often used as a meeting or seating place or a waiting area.
The placement of the object offers the public space an opportunity to modernize. The object’s proximity to a crosswalk makes it a great place for resting .
By reinterpreting it as a coated relic it becomes a landmark and also a way to remind people the events that took place in 1989’s Revolution. 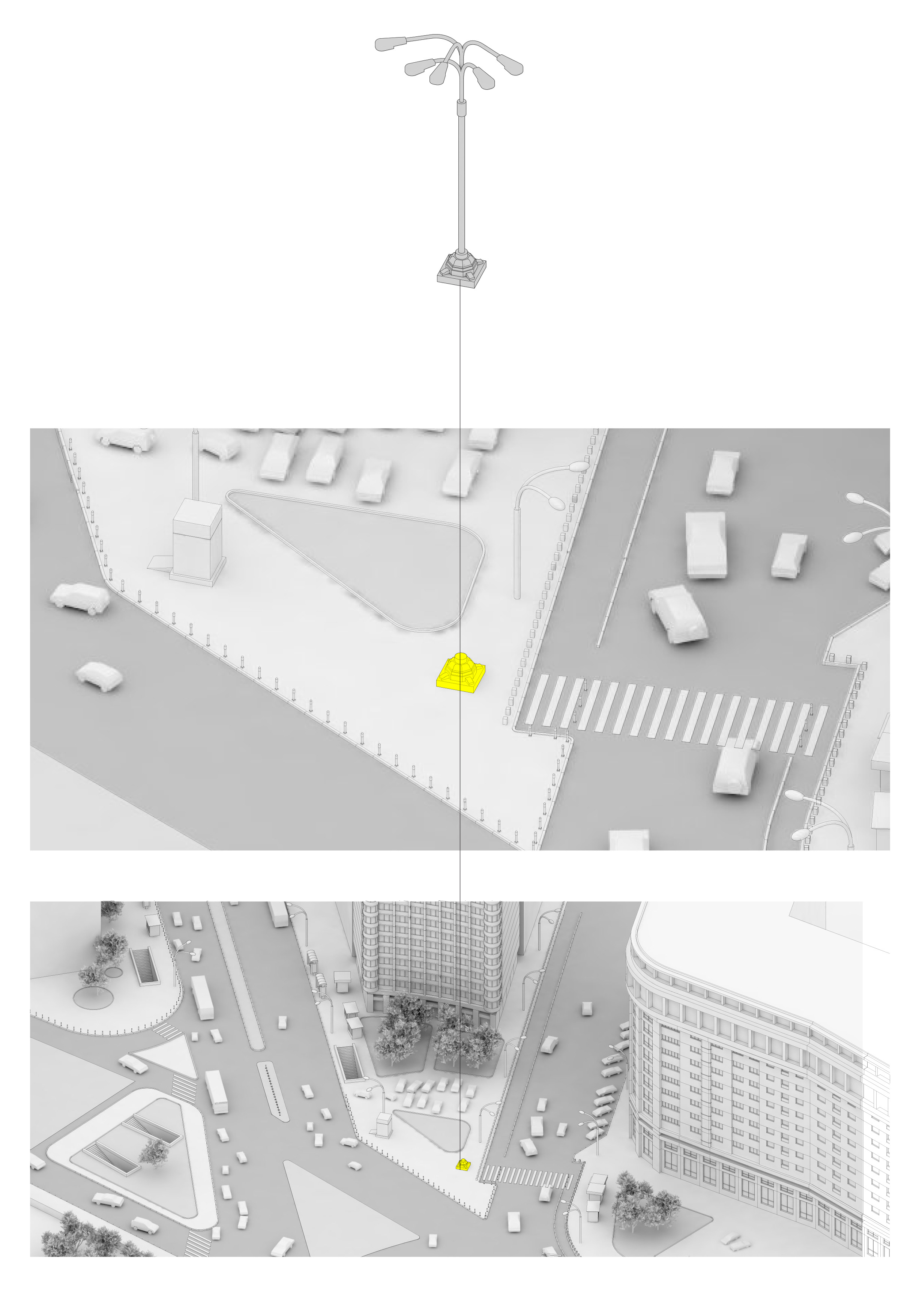 A 3d Model of the Former Lighting Pole 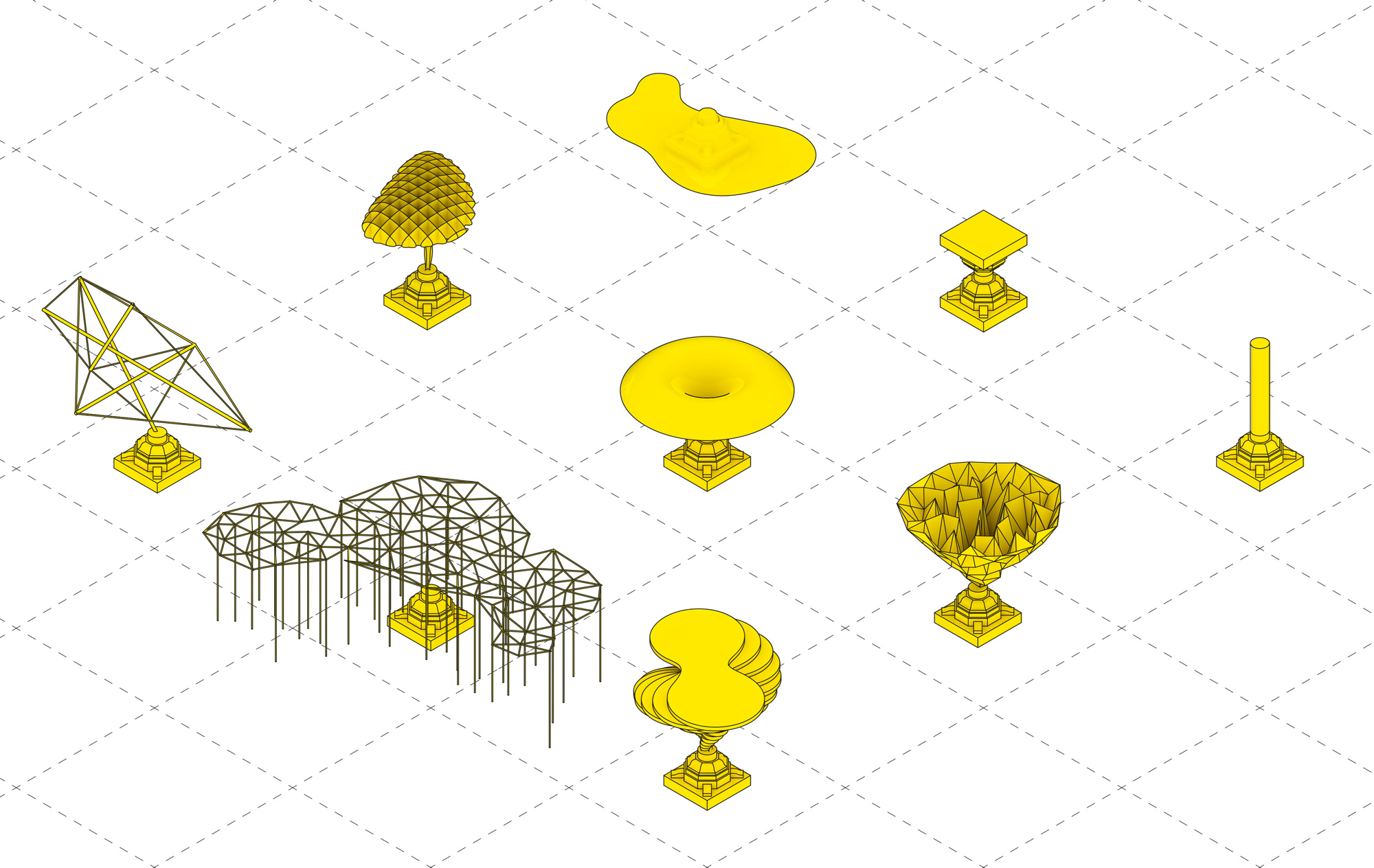 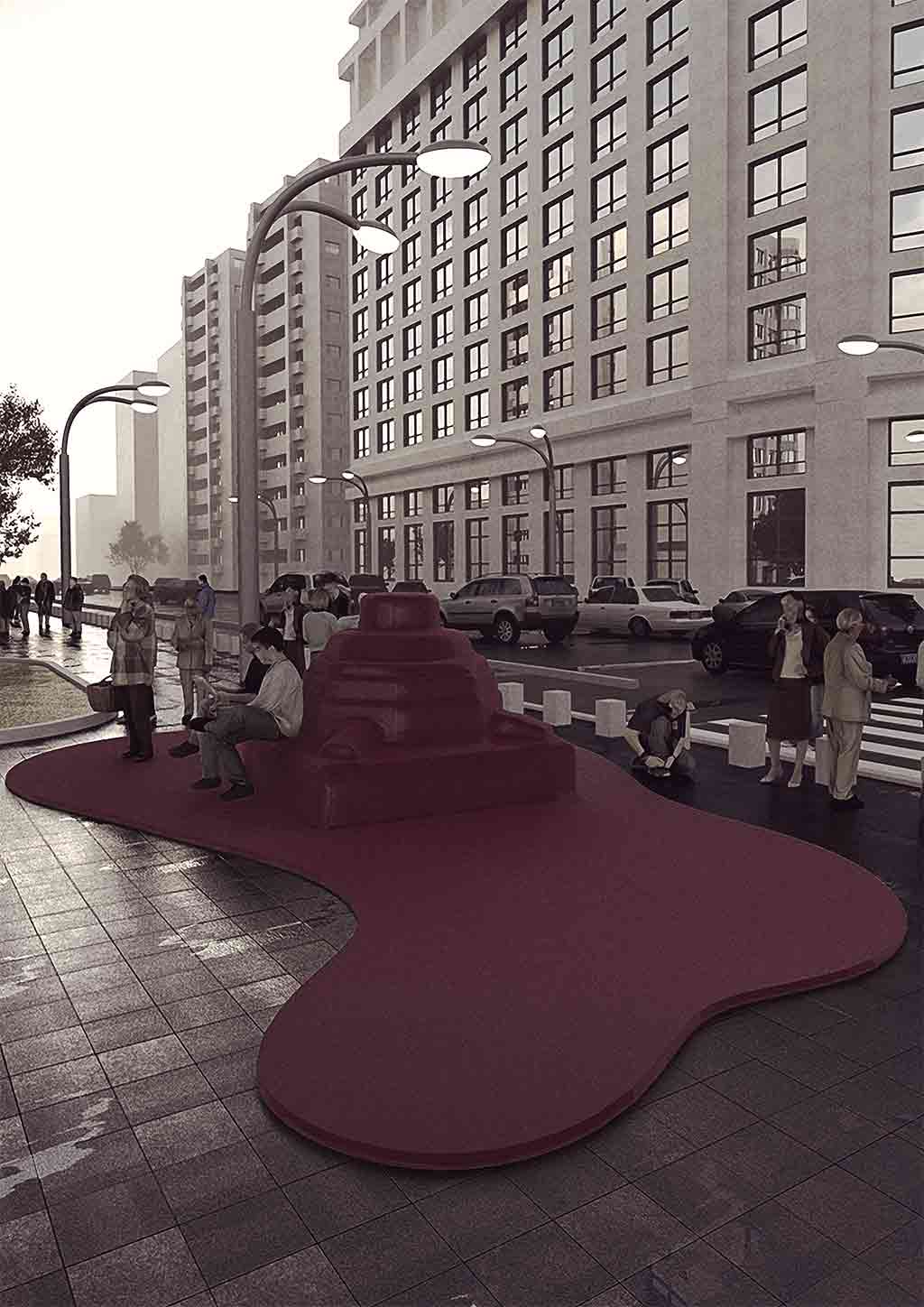 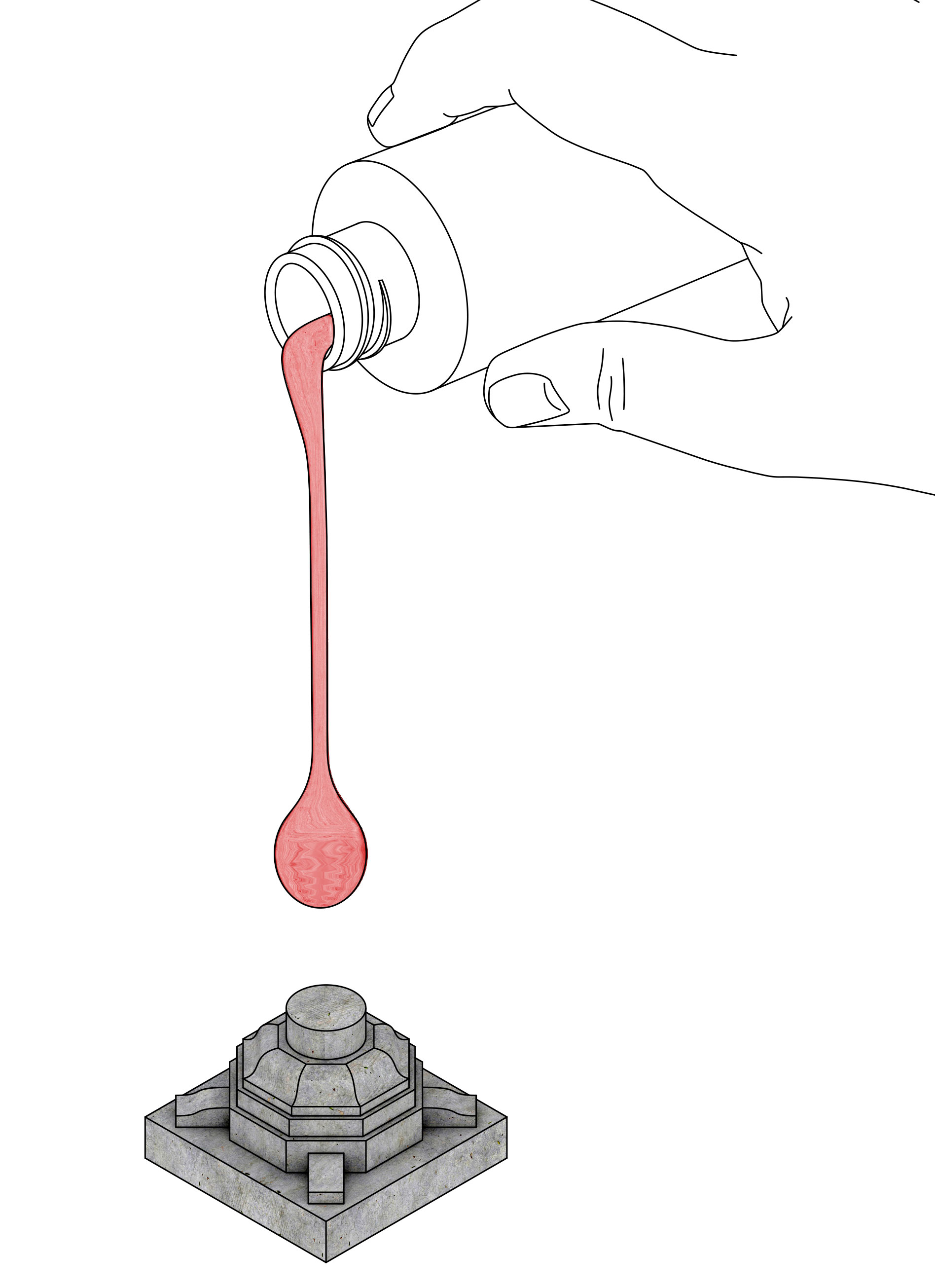 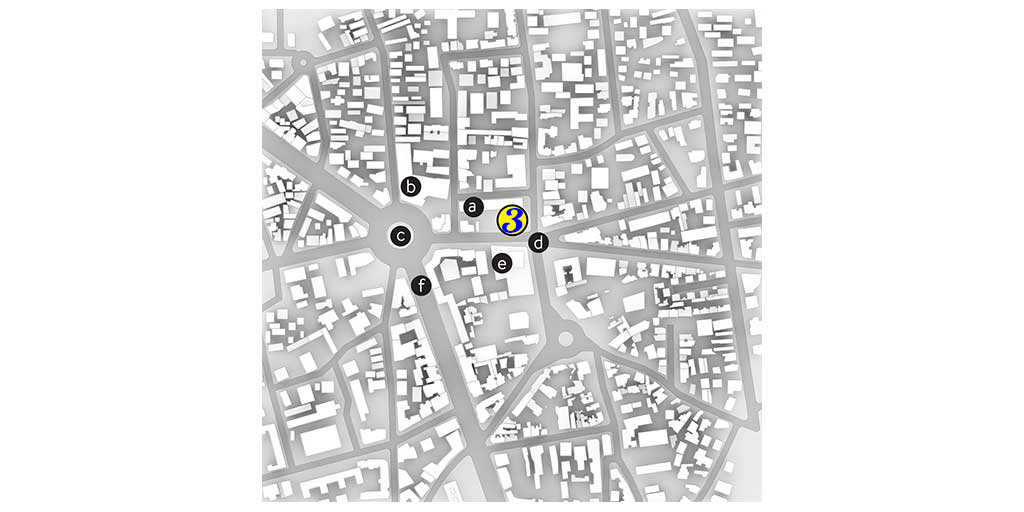 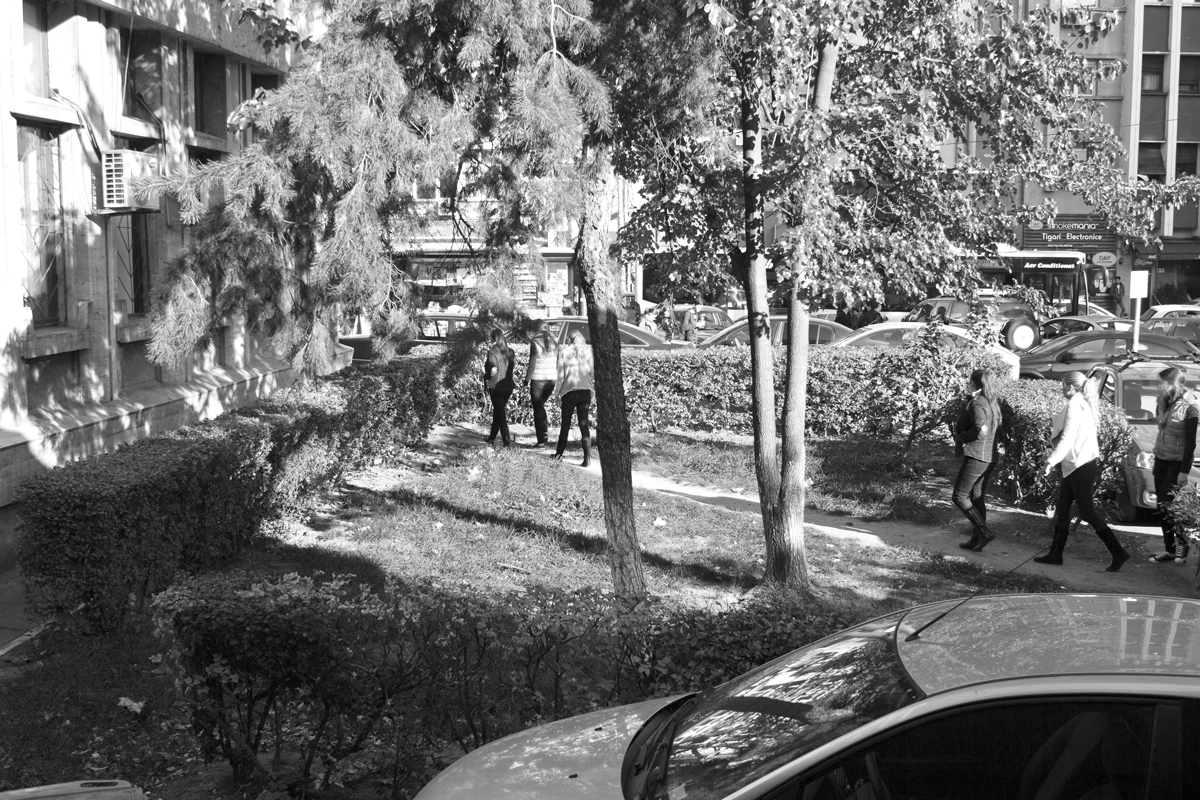 The new building of the Academy of Economic Studies, situated at the crossroads of Dorobanti Street and Dacia Boulevard intrigued us through its landscape planning. The space in front of the entrance is shielded from the busy street through trees and hedges. This space acts nowadays as a transit area for pedestrians. People felt the need to cross this green area before entering the building thus creating an alley-a link between the sidewalk and entrance. We found this change of land use the expression of a need – the need for a public space designed for users. In terms of user profile we find many corporate employees and students during the week. At night, the whole area lacks its usual users due to a low number of attractions. The space becomes overnight a shelter for many homeless people who find behind the hedges a resting place. We tried to keep in mind all these aspects and implement a series of urban furniture objects. Thus a small area for interaction and recreation is created. 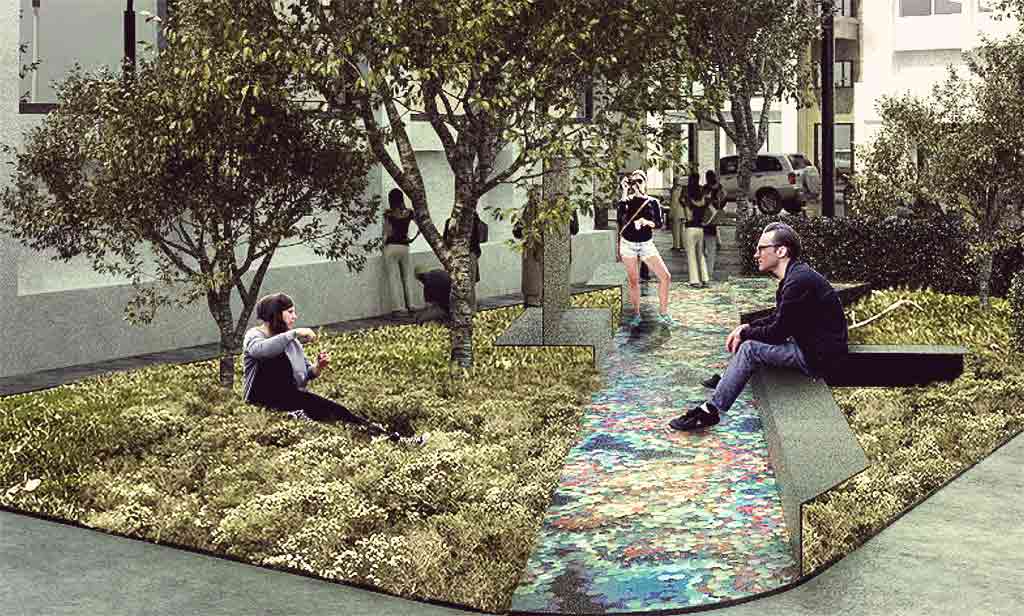 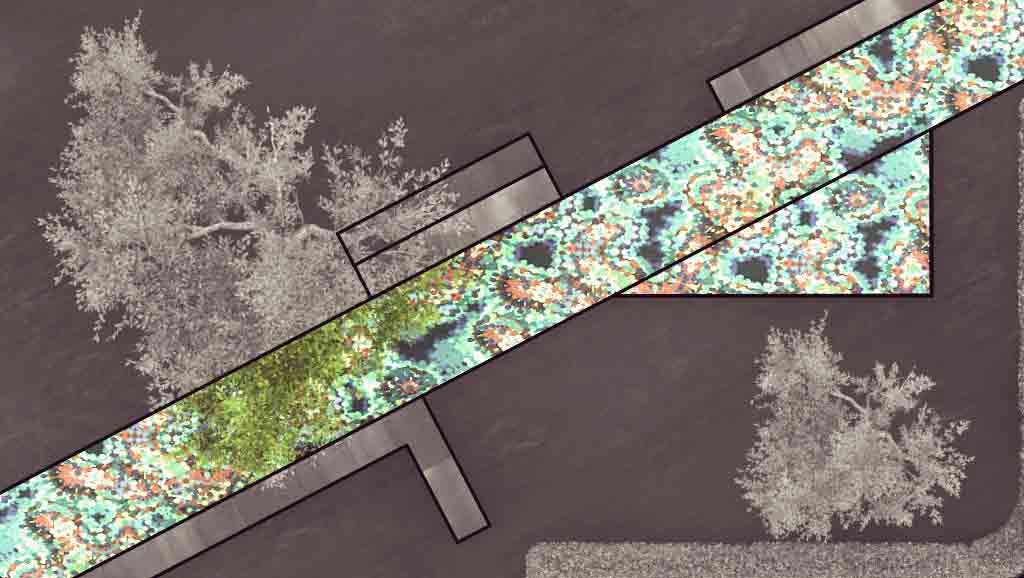 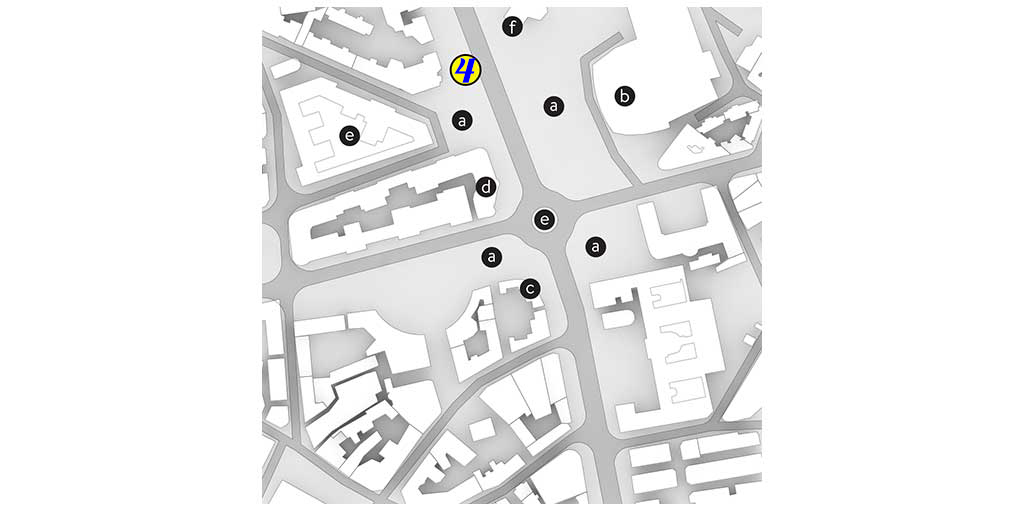 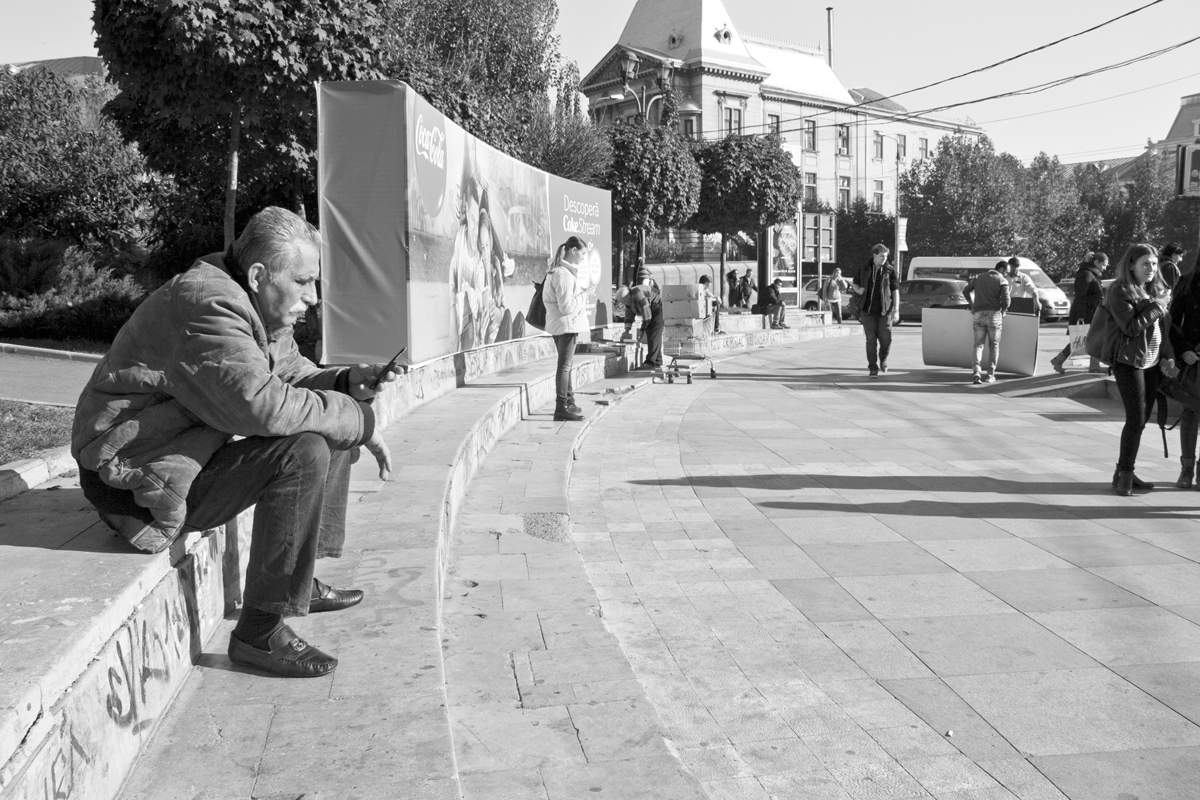 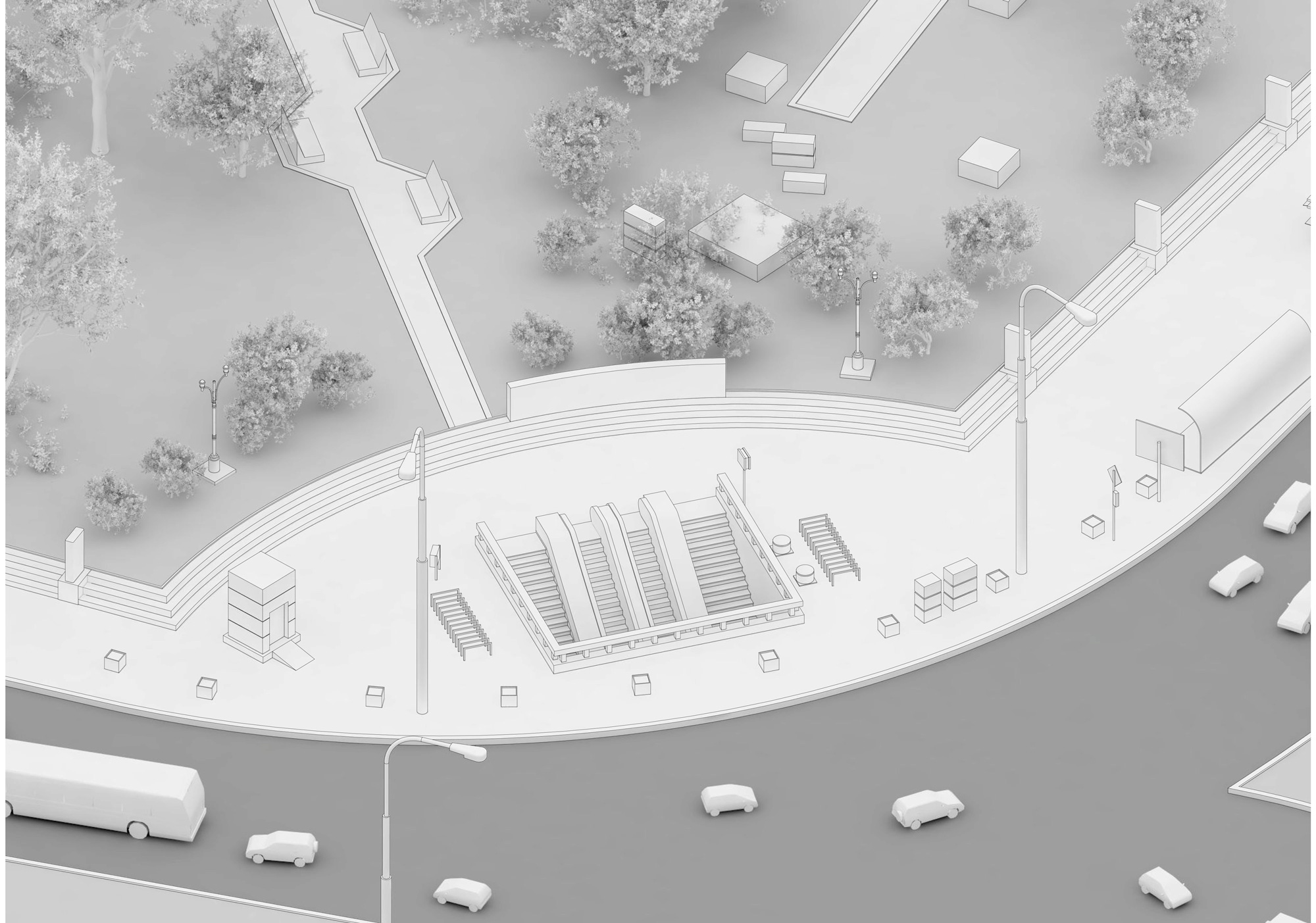 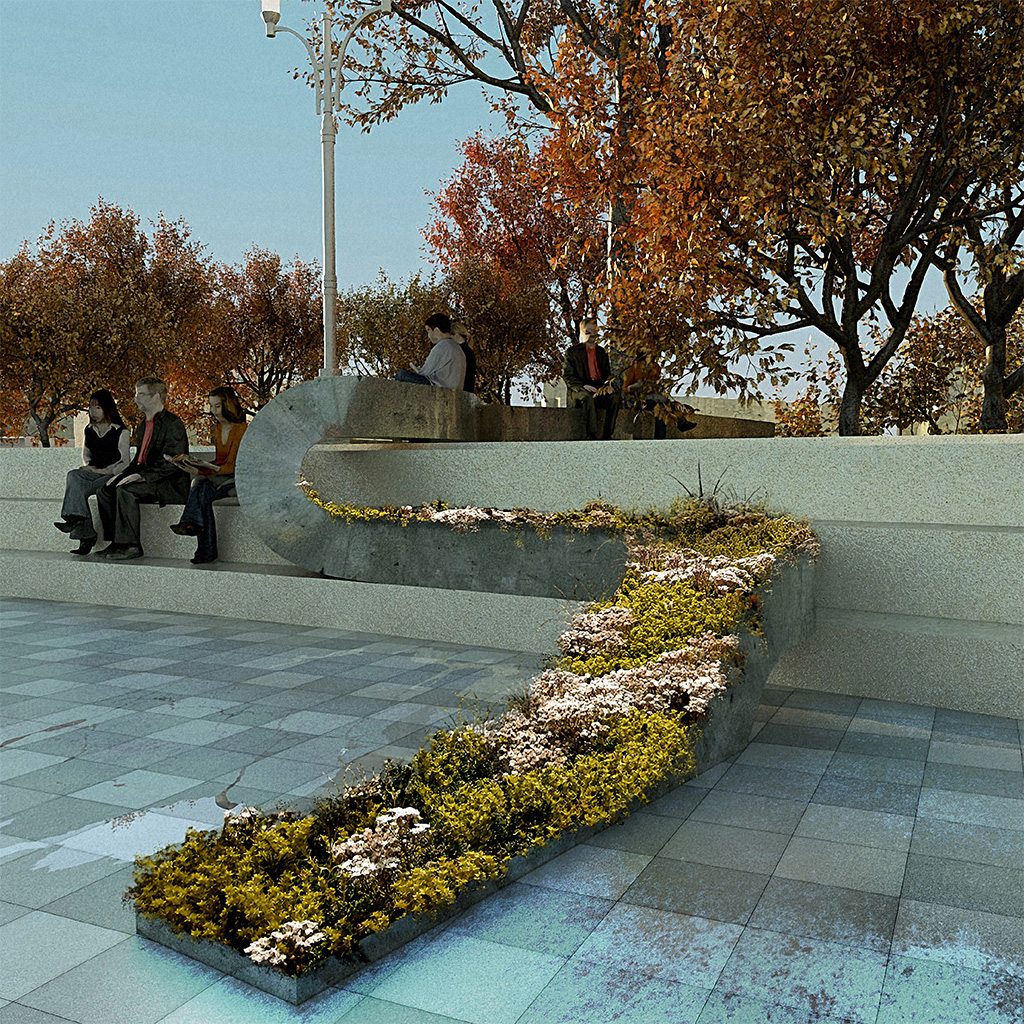