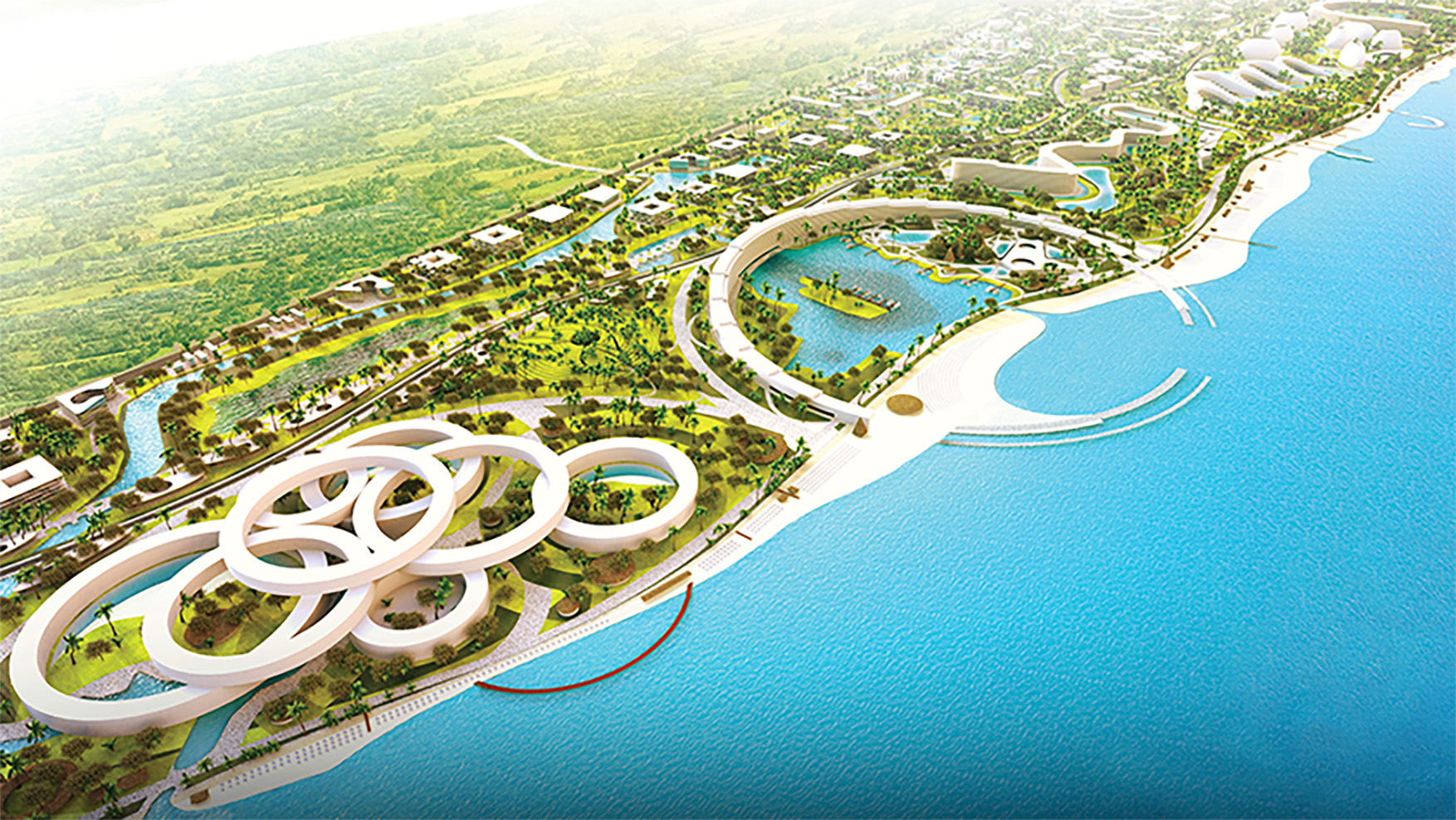 The land studied has an opening to the sea of 4.1km and a total area of 3.6km². The project proposes a development in seven stages, in each of which will be built a 5-star all-inclusive hotel with all functions, a holiday apartment area, commercial spaces, public spaces: parks and boardwalks .

Cuba is the largest island in the Caribbean. Also it is the least expensive. In addition to low cost living, tourists are attracted by the perfect winter weather and more than 300 white sand beaches lapped by turquoise seas. The dramatic karstic landscapes of the Viñales Valley, Spanish colonial cities like Trinidad and the capital city. Havana belongs to another era, with its vintage American-style cars, its art deco architecture and lack of violent crime. Four million people visited the country in the first nine months of 2017, making tourism the largest source of foreign exchange after sugar. 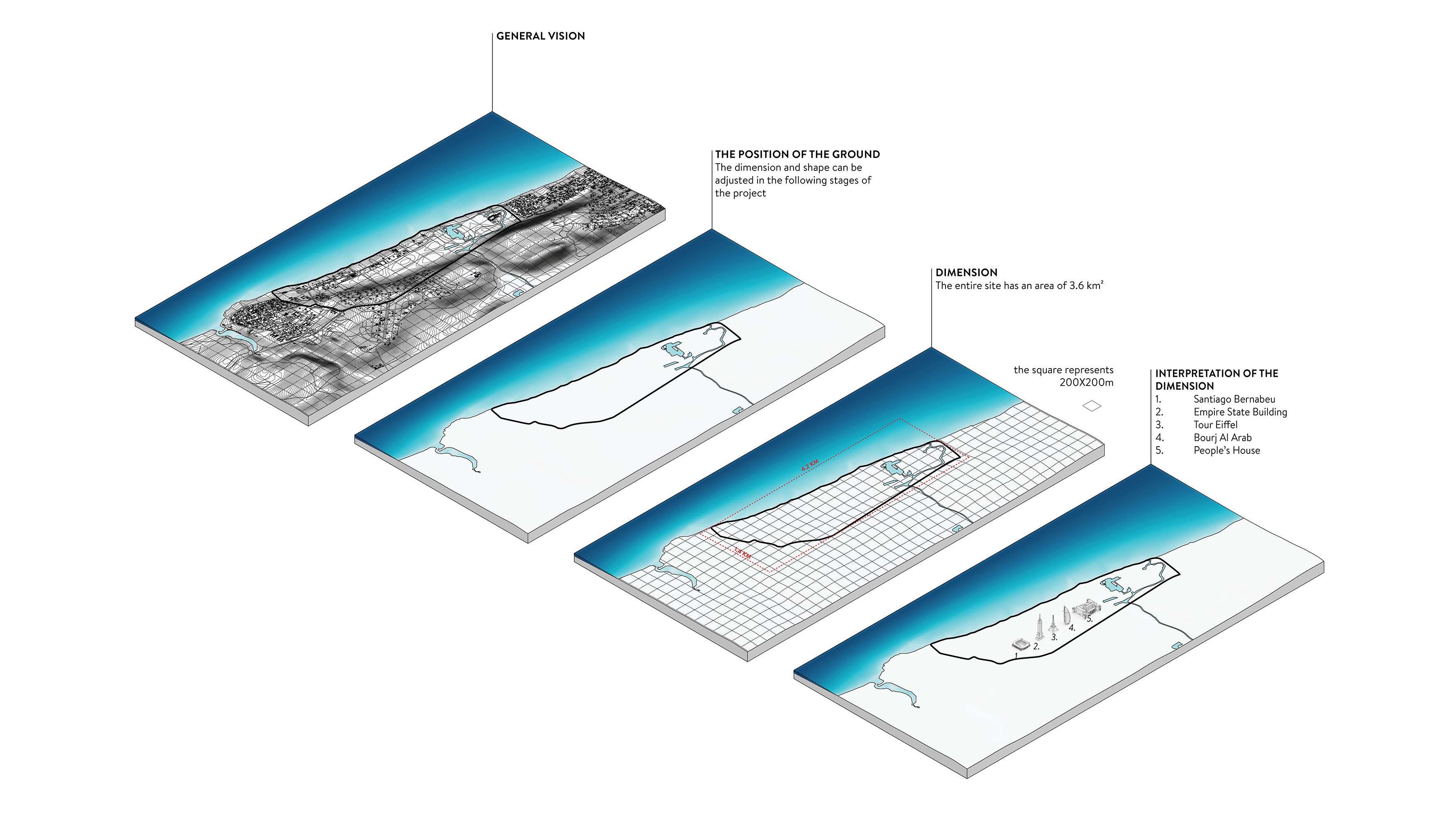 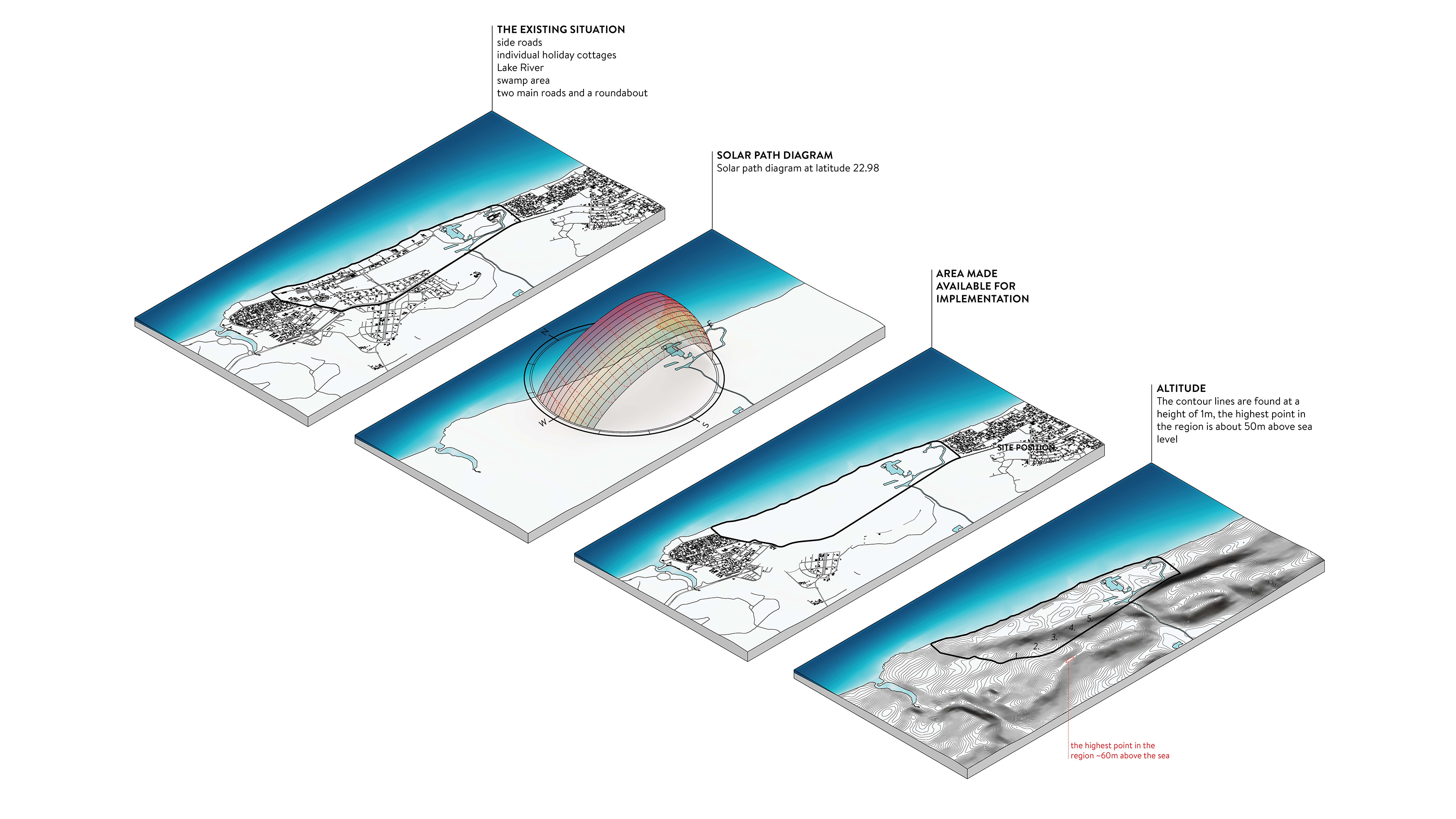 The starting point was the desire to preserve and protect the natural environment: the beaches and the lagoon formed by the Boca Ciega River. That is why the entire width of the beach and the area of sand dunes and vegetation will be maintained in its entirety, and the buildings will be removed between 150 and 200m from the water line. The river follows its course and the existing lake will be open to the sea, forming a natural marina. Another central idea was to develop the area in a coherent and integrated way. The proposed master plan creates a true resort town, rejecting the model of gated, self-sufficient complexes. Three boardwalks connect, in parallel with the coast, the 7 stages of development, providing visitors and locals with numerous opportunities: night walks, jogging, bike riding, trips with electric trains, restaurants, bars and terraces, attractive public spaces with fountains, lights, resting places and belvedere.

The relationship of the hotel zone with the sea is through an esplanade that contains public functions, services and recreation. The intersections of the pedestrian paths form public plazas between the large hotel areas that connect with the water through long pontoons, accommodating the direction of sight and the dynamics of movement. The hotels are developed towards the beach with private pontoons, both on the ground and in the water, which allows clients unique recreation areas for each type of design. 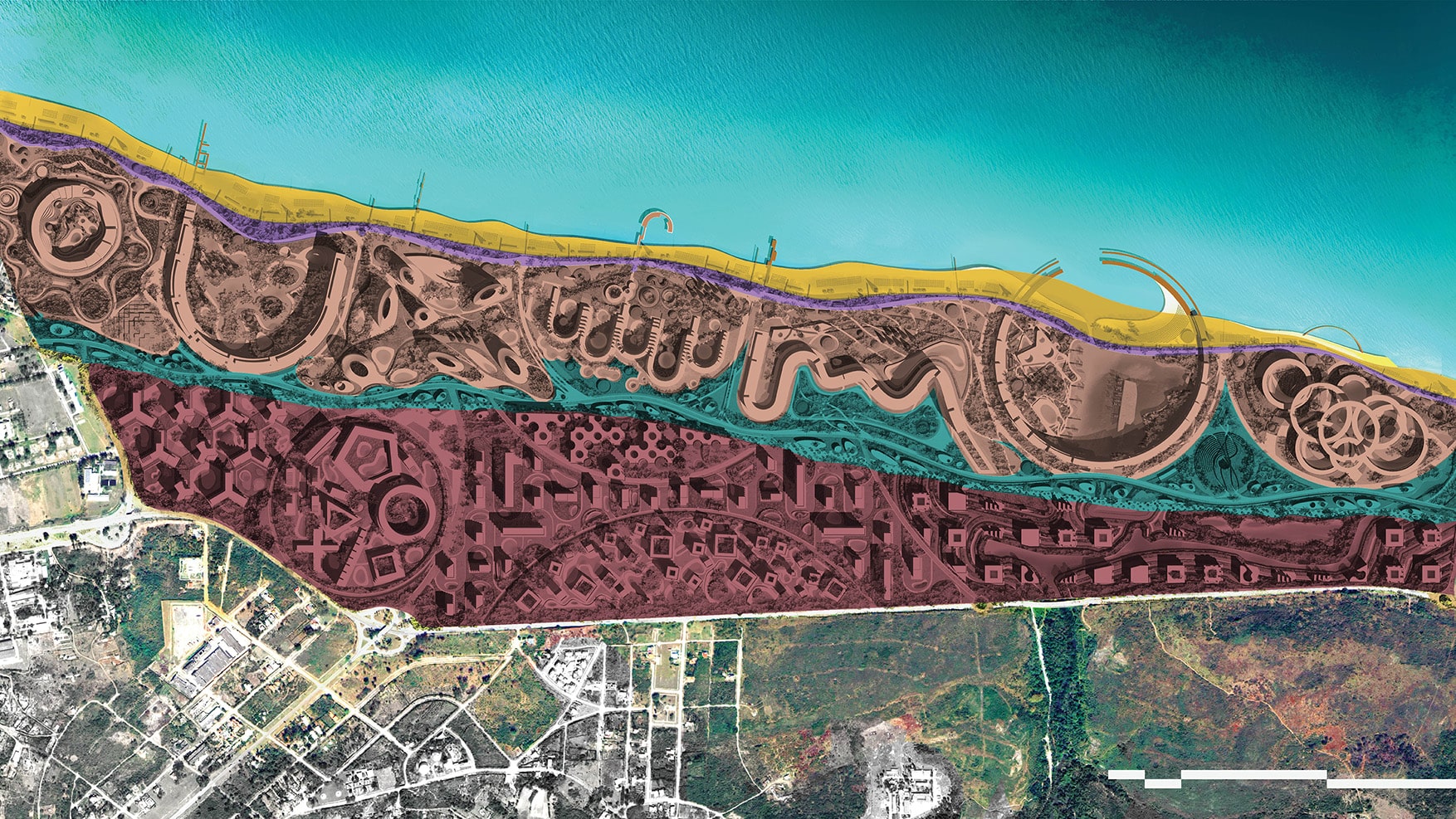 The land is divided into 5 main functions, distributed in the form of longitudinal strips, extending in an east-west direction, parallel to the ocean shore.

These pedestrian boardwalks structure the entire development, layering it in an East-West direction and serving the proposed construction areas. Starting from the sea, the first is a boardwalk in the middle of nature, on the border between the beach and the dunes with vegetation. It is a wooden boardwalk that can be used for jogging in the morning, to get from one restaurant terrace to another or to feel the sea breeze closer. The boardwalk slips between the beach and the dune area that will be interwoven with tall vegetation in the shadow of which restaurants, bars and terraces will be placed. 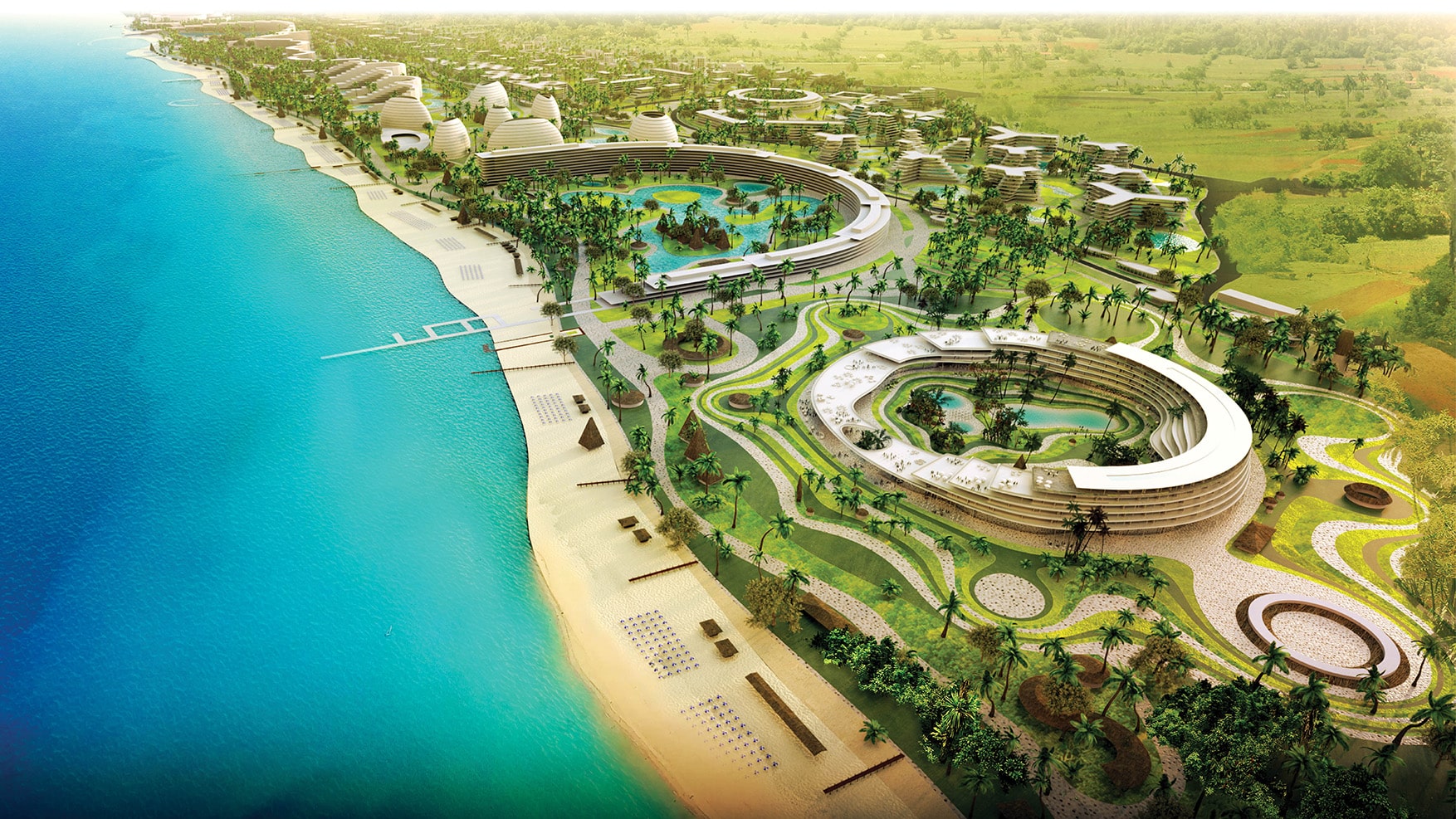 The second boardwalk is wider and more urban, with stone paving or ceramic tiles. This has the restaurant area on one side and the all-inclusive complexes on the other. There is the possibility of choosing from a wide variety of restaurants among which you can circulate on foot, by bicycle or by free electric transport. The boardwalk is interwoven with numerous amenities and attractions: squares, artistic installations, musical artesian fountains, rest areas and street performances. 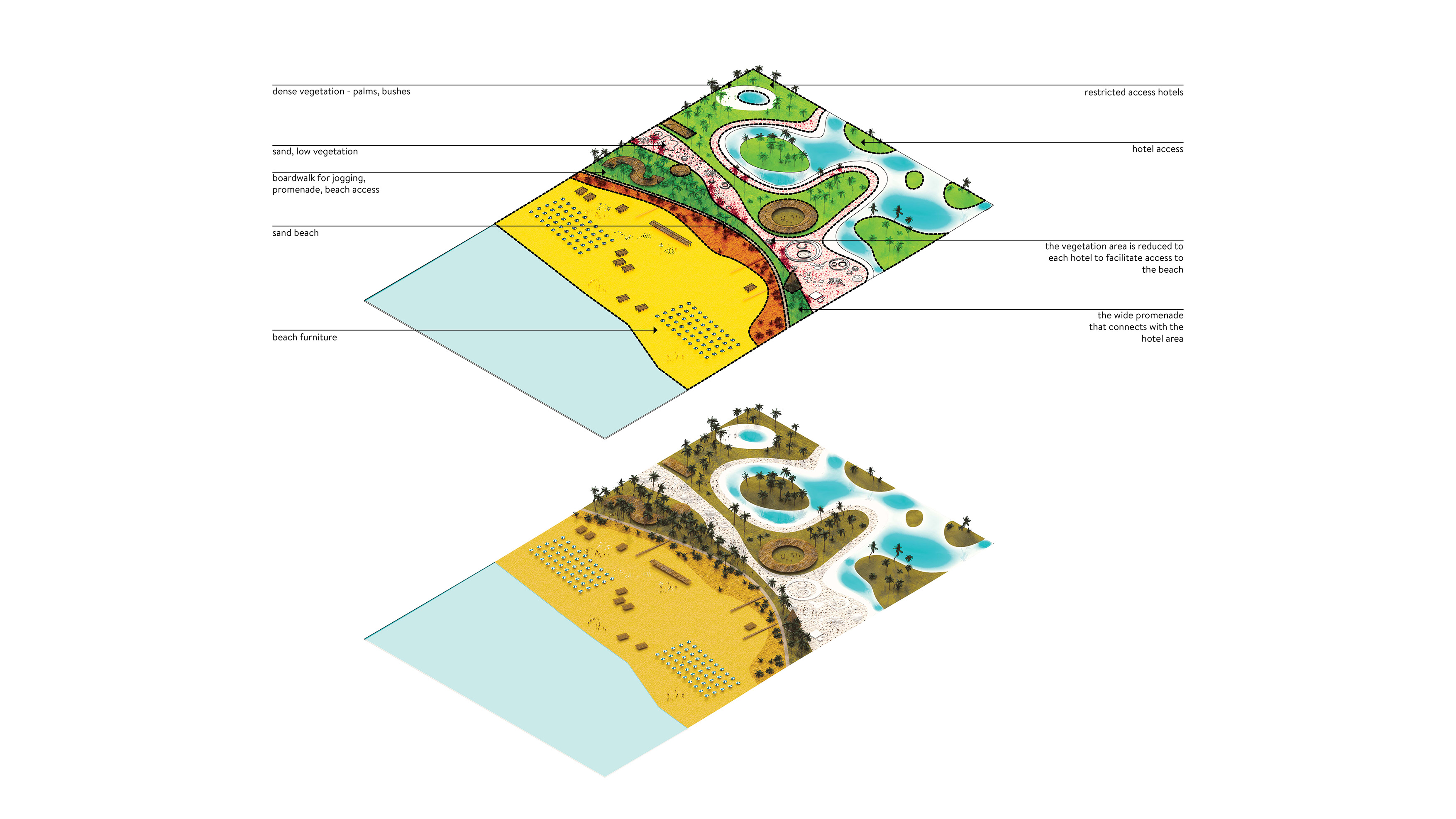 Our design process involves testing different scenarios, both for hotels and aparthotels. The more we expand the range of options, the more we can filter and improve the following options. Thus, the final result will always be composed of the best ingredients, selected from all the designs tested in the process. 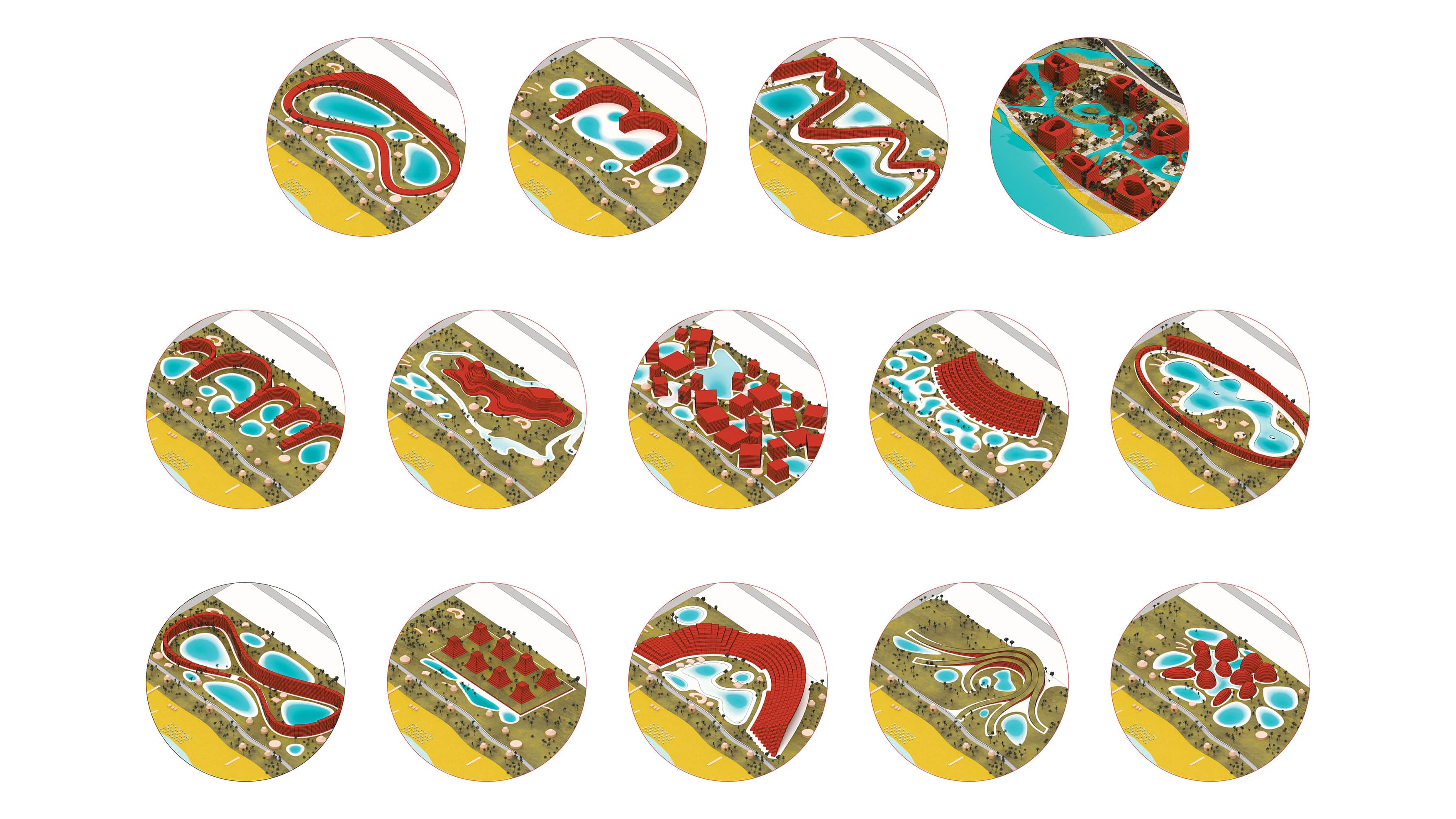 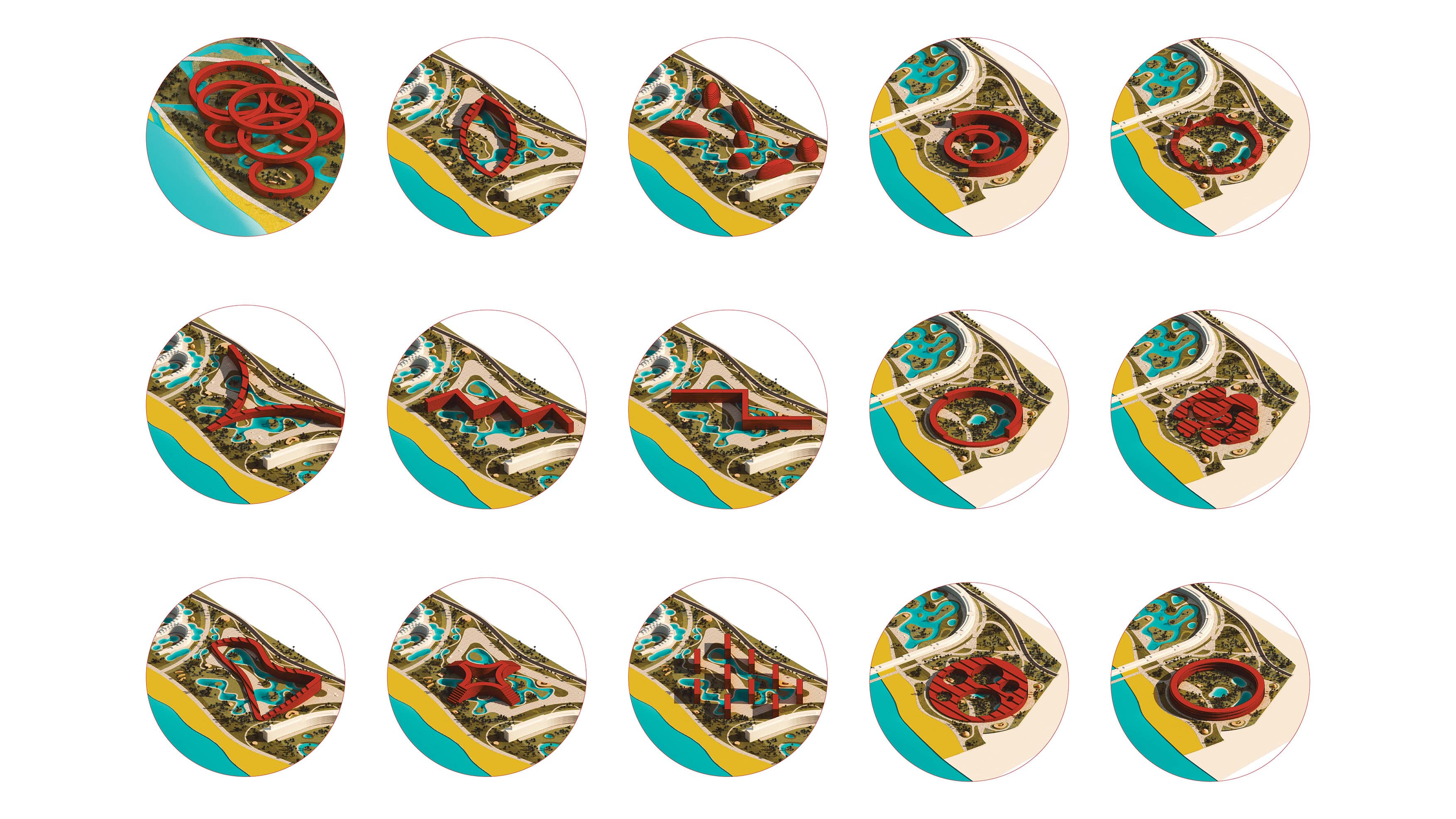 After the area of all-inclusive complexes, a passable avenue follows, which allows access to both the hotels and the commercial spaces along the way. The commercial spaces arranged on both sides of the avenue serve mainly the apart-hotels located to the south, but they also offer an alternative way of spending time for tourists from the complexes. The proposed pavilions house all the necessary functions and services, such as: supermarkets, specialized stores, restaurants and cafes, gyms, beauty services, casino and so on. 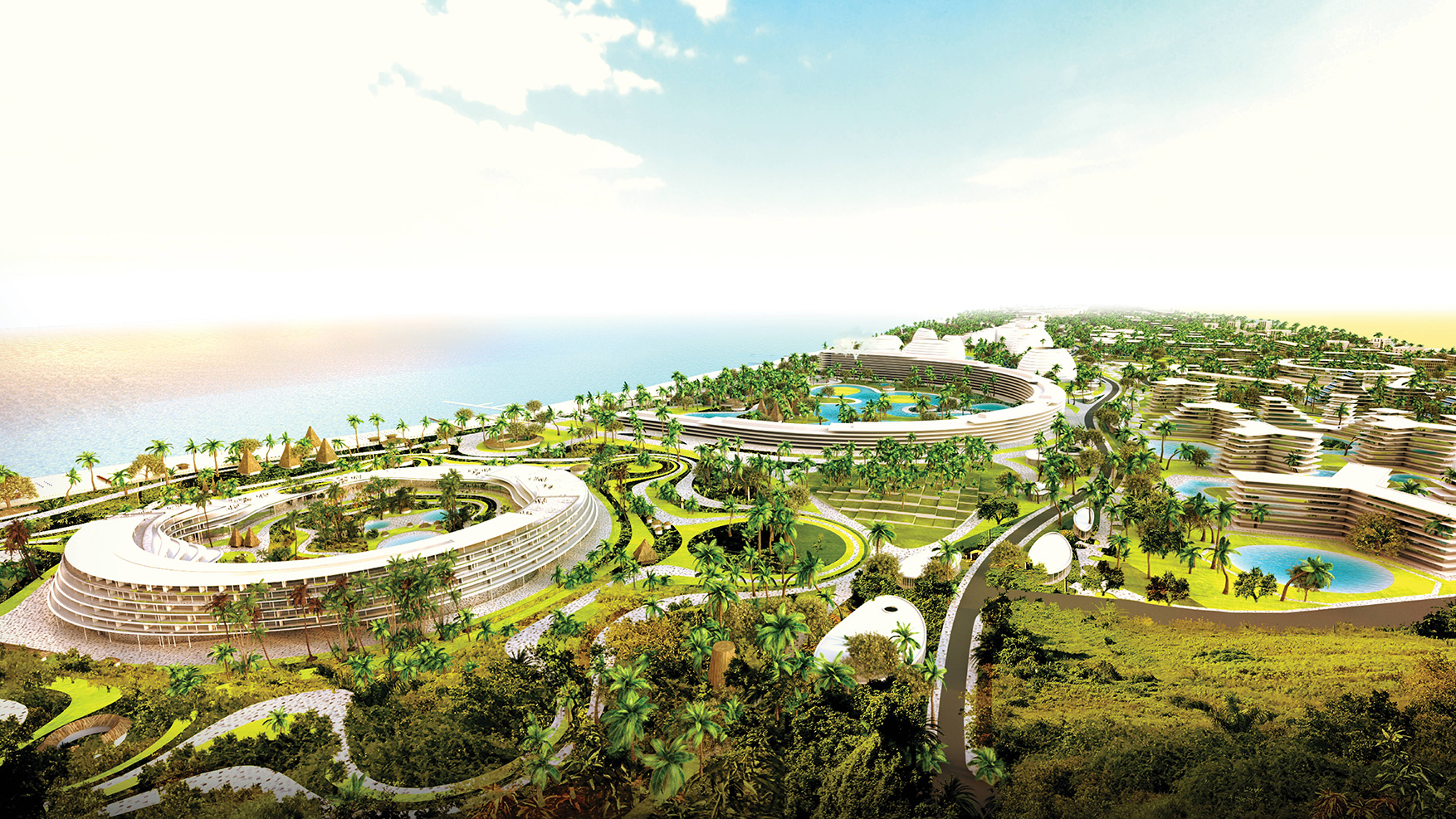 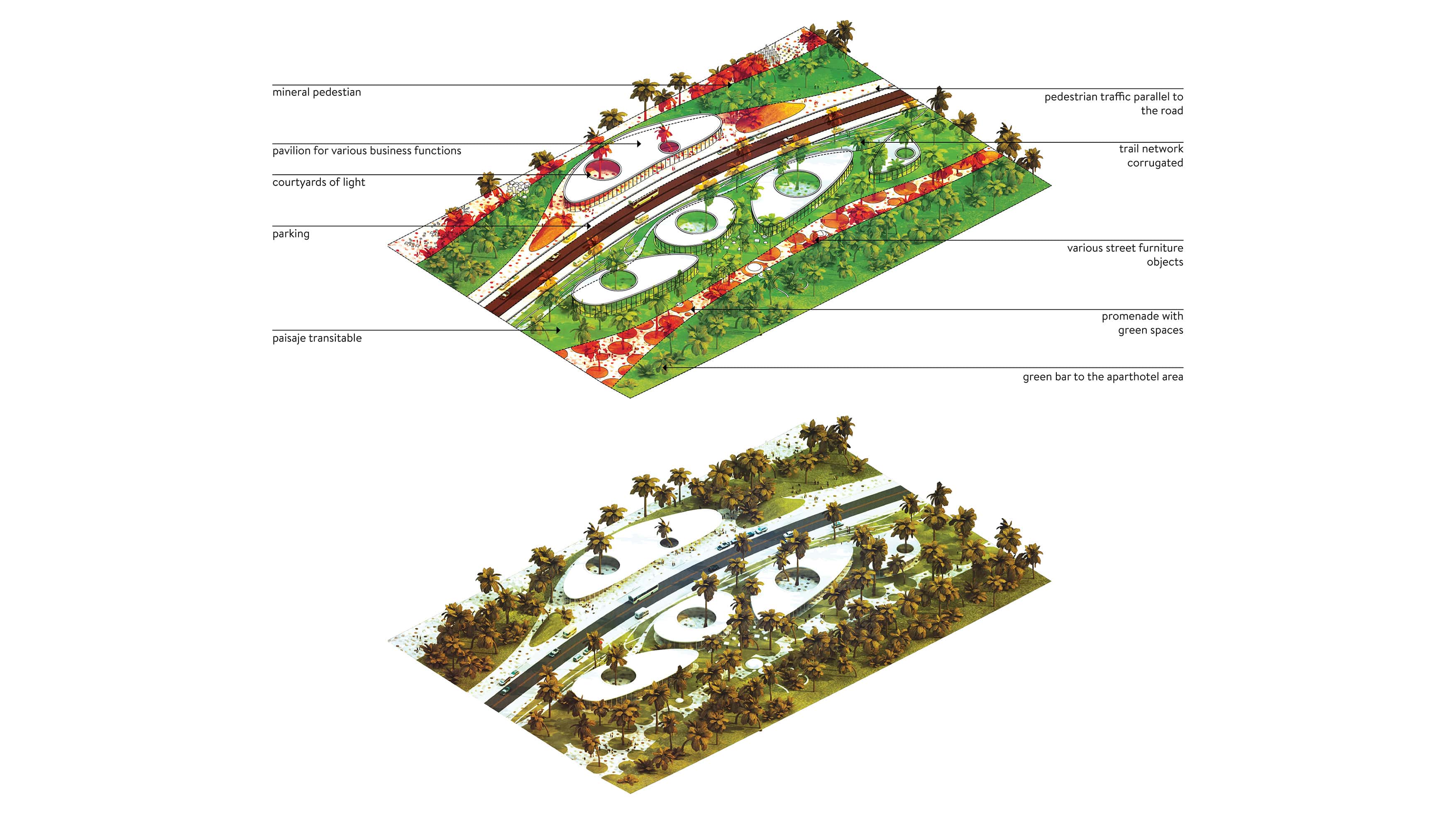 The Avenue bends to the south by the third malocón, the park boardwalk. This limits to the north with the wide park where the apart-hotel area is located. The apart-hotels are organically grouped into 7 different groups, each with its own personality defined by a particular architectural morphology. Apartments with one or two rooms are proposed, with an average of 100m² and large terraces. The apartments are specially designed for families who want longer stays at an optimized price, with the possibility of accessing all inclusive services on demand, against cost. 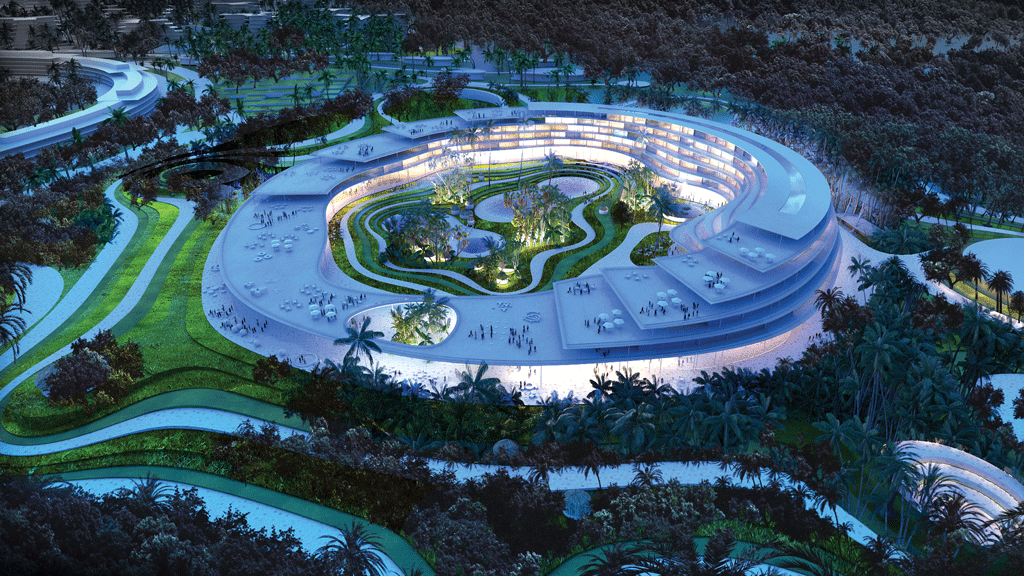 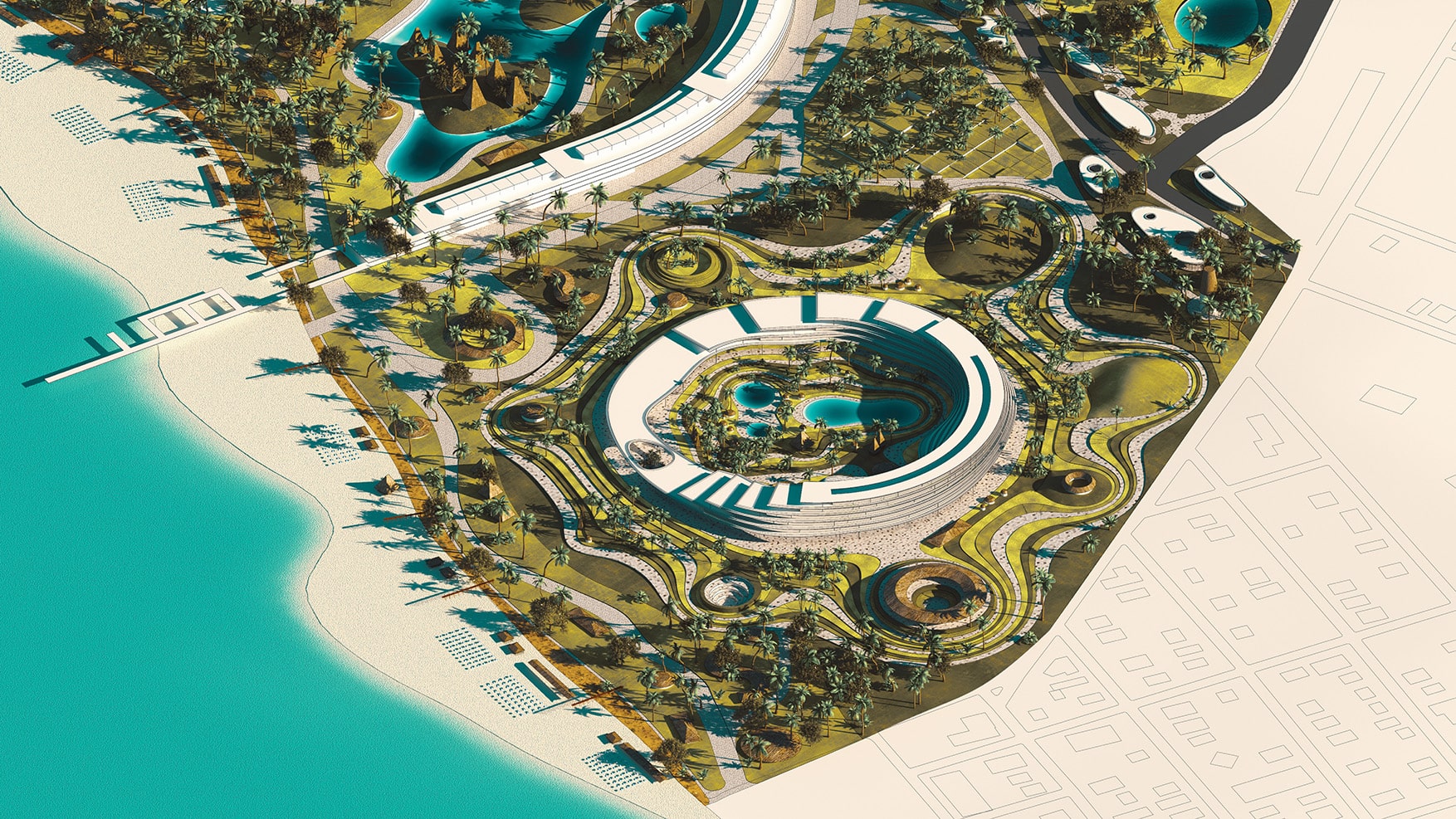 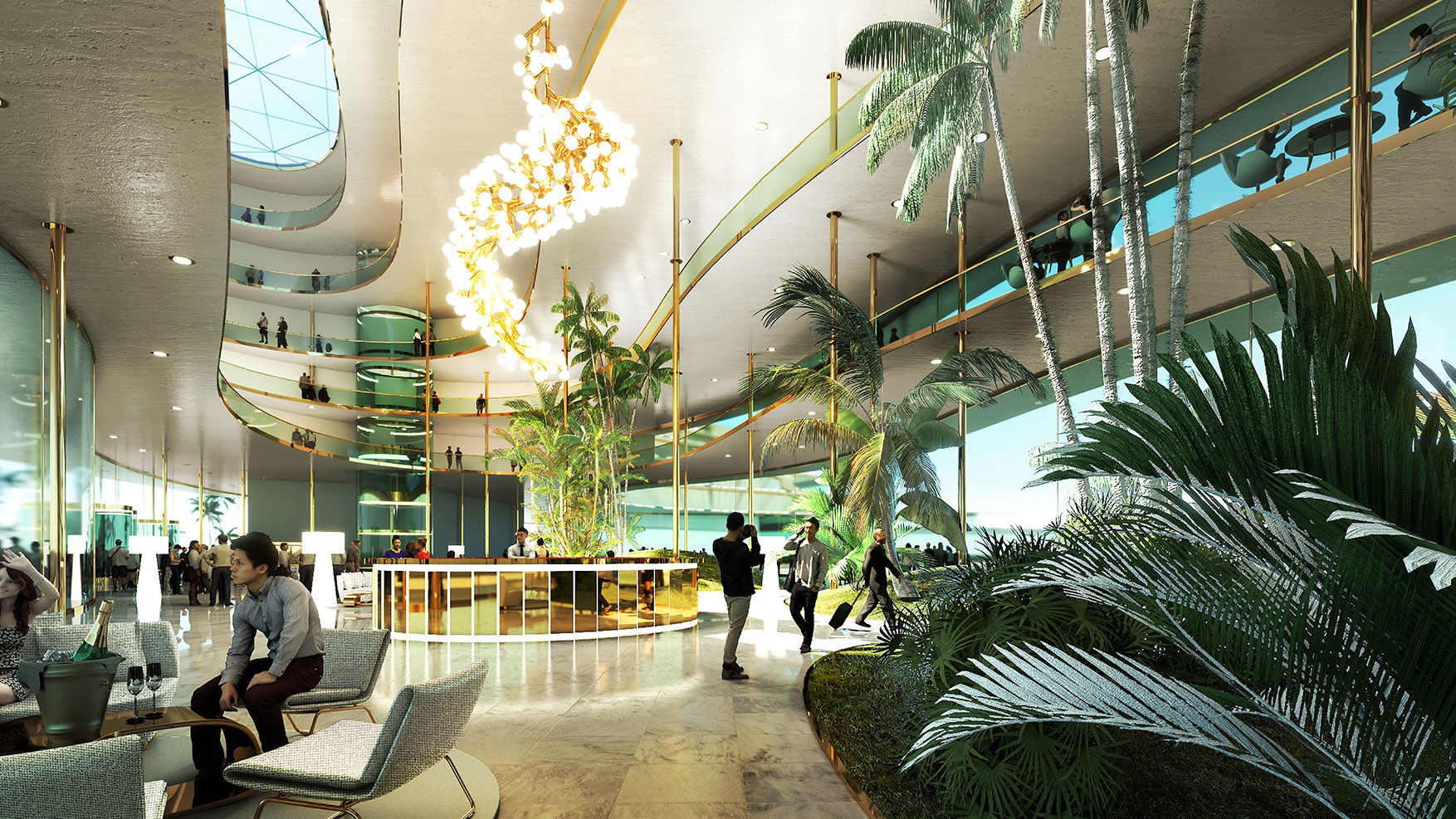 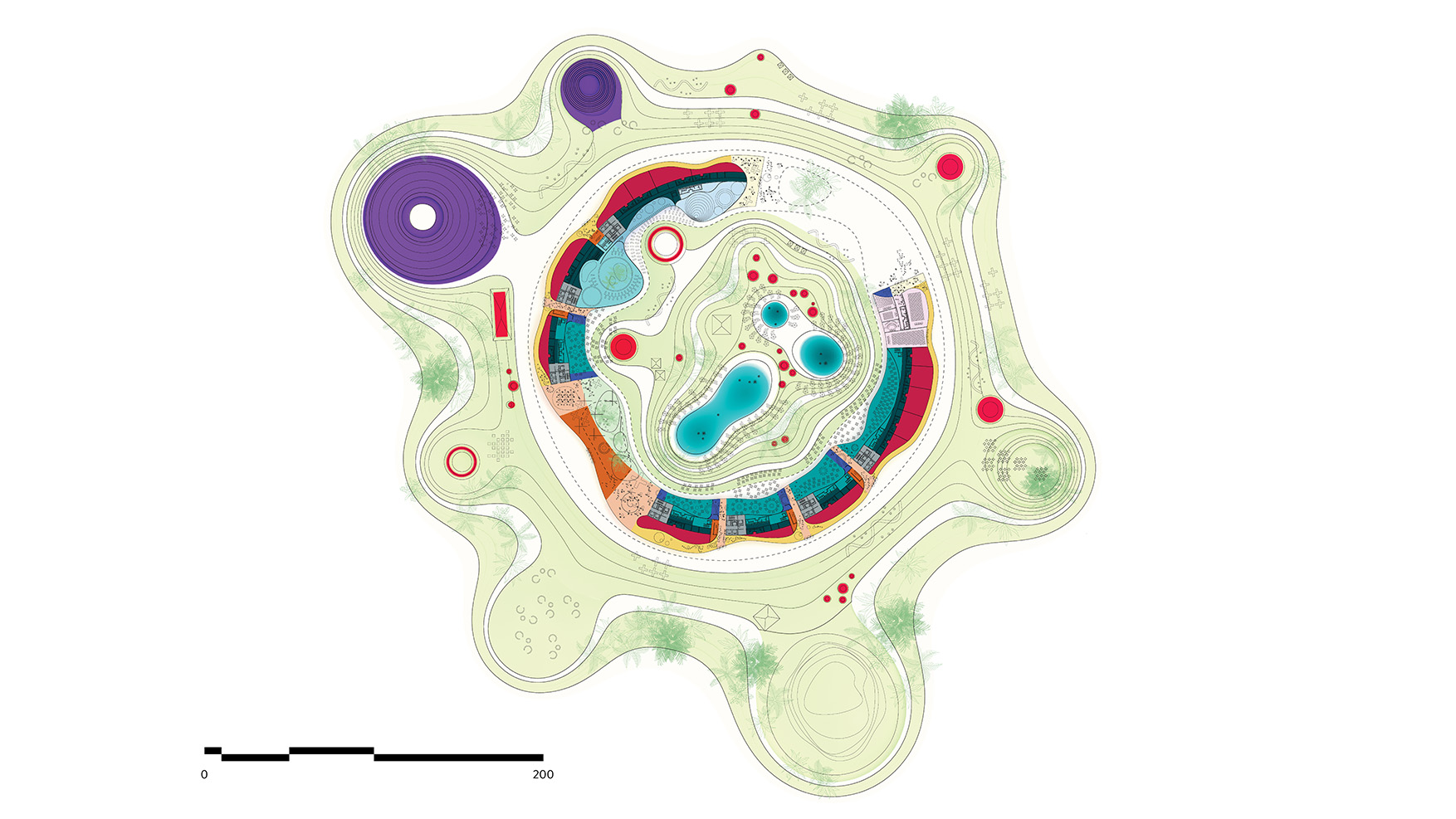 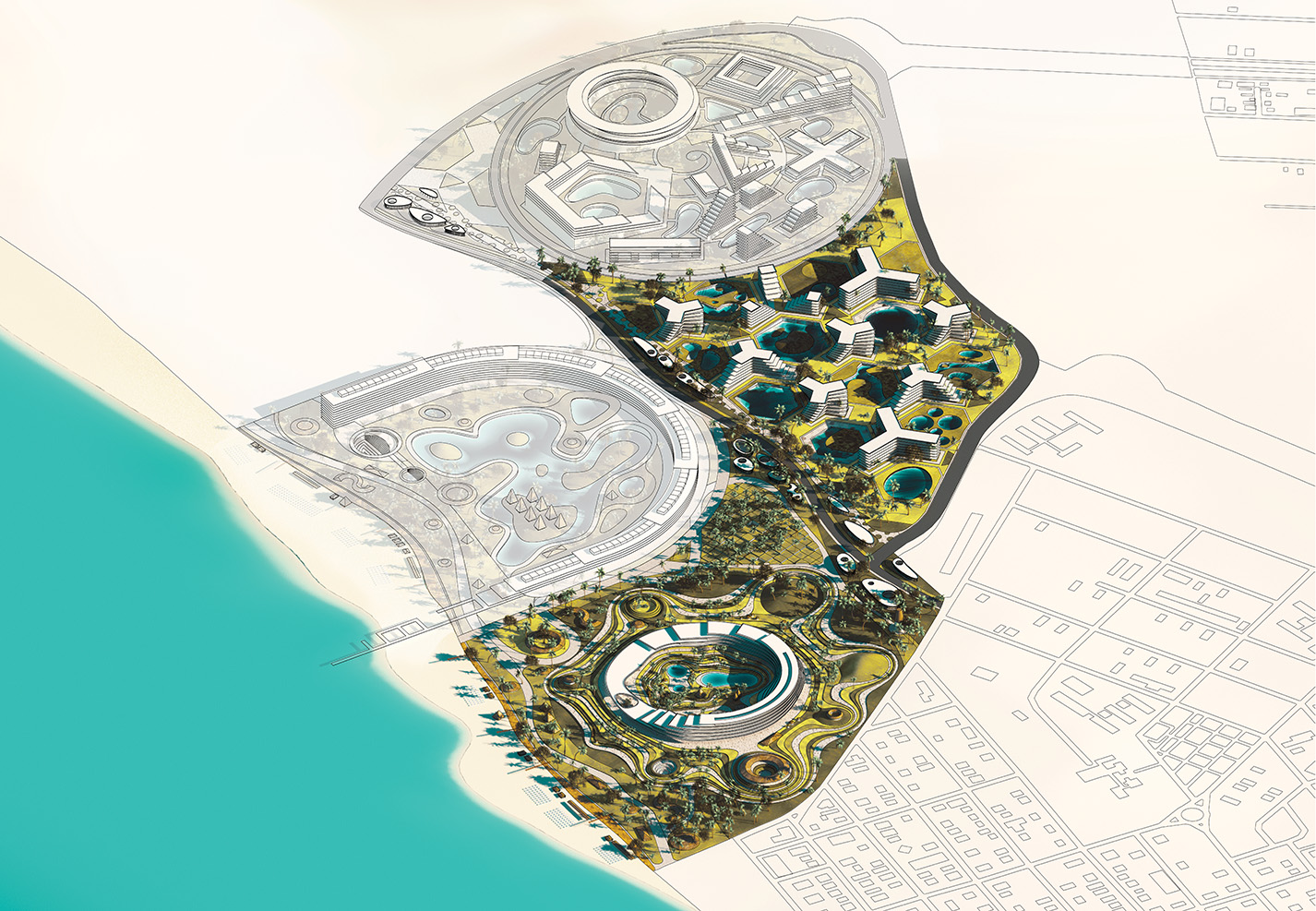 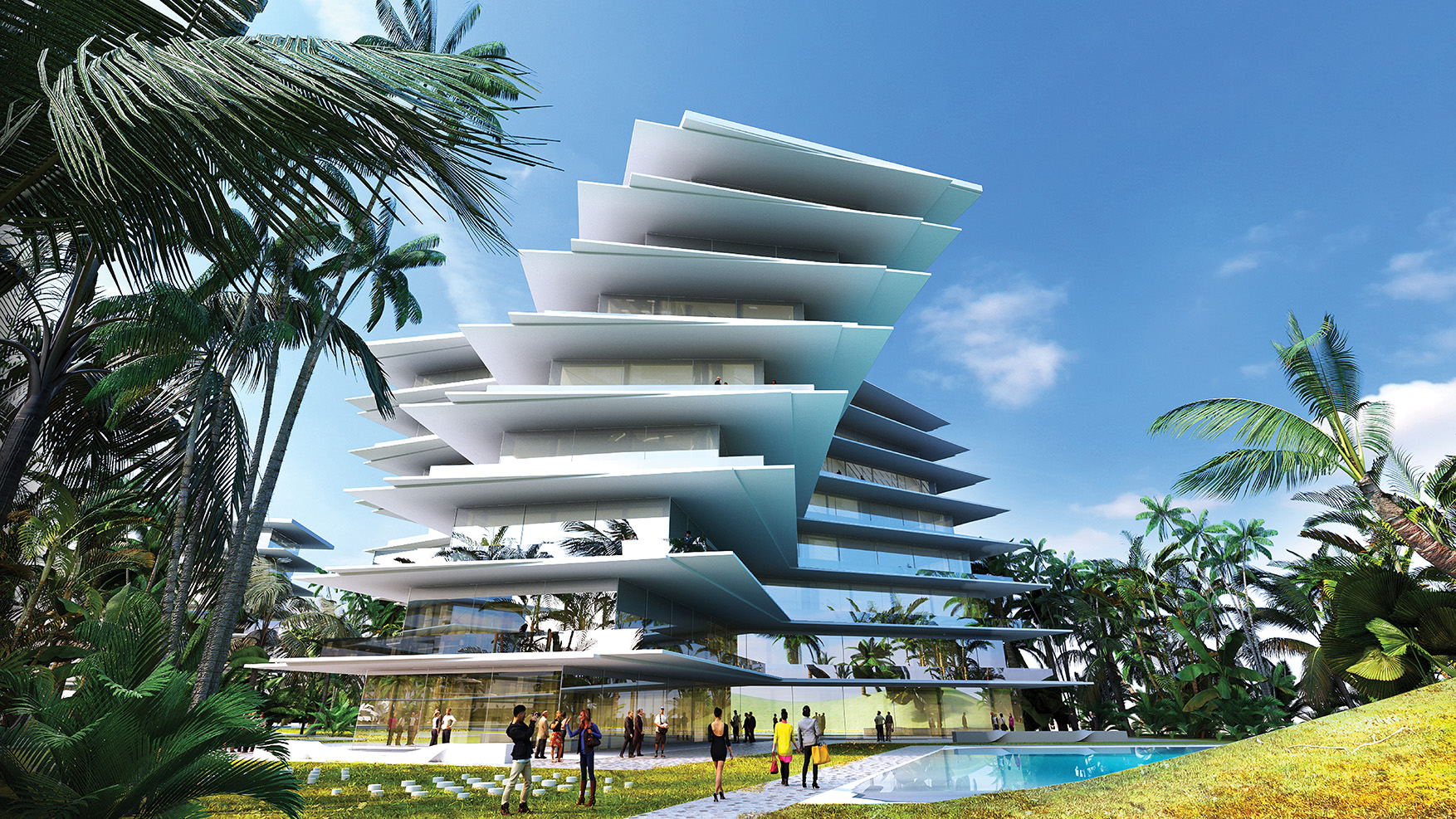 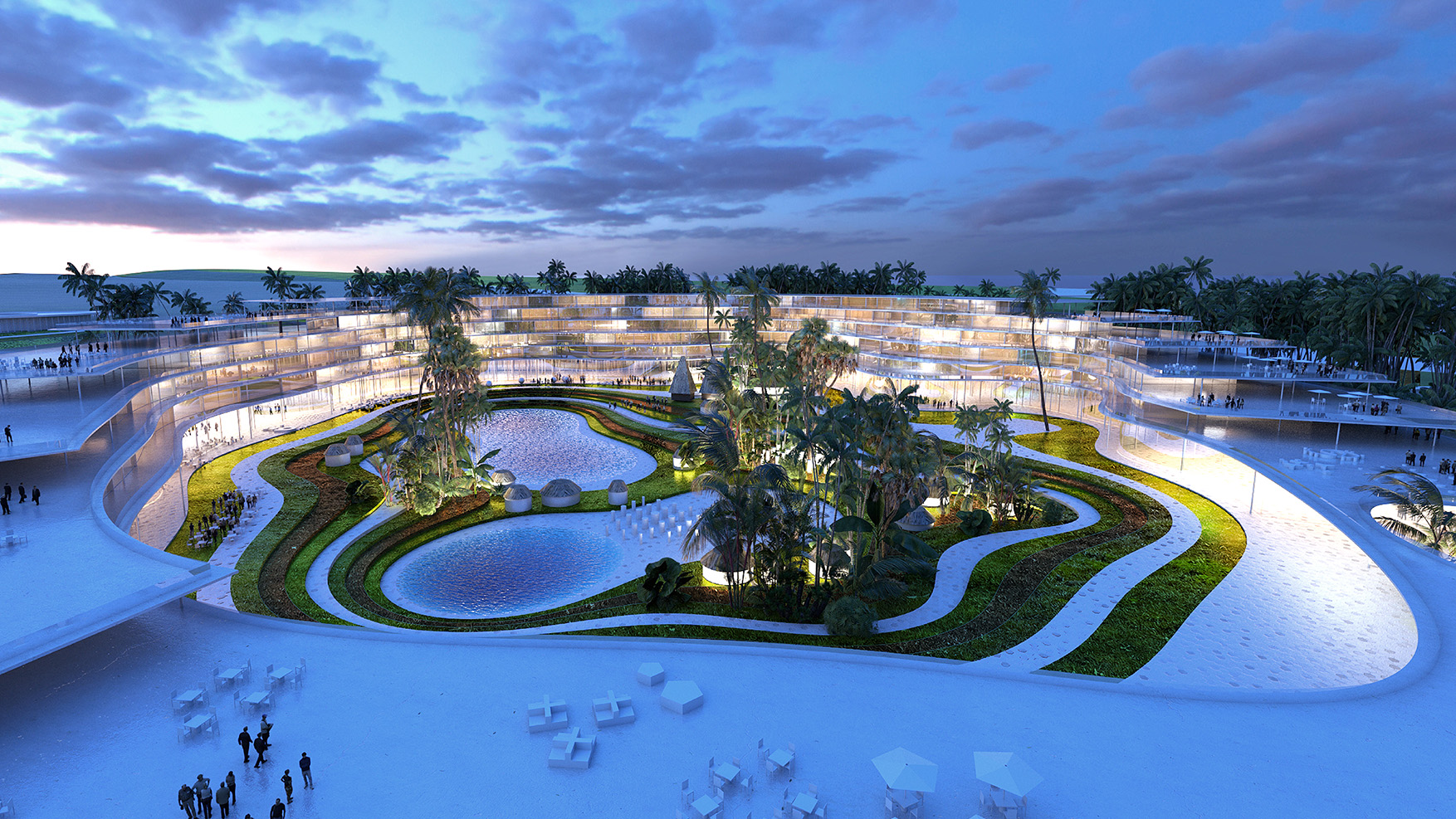