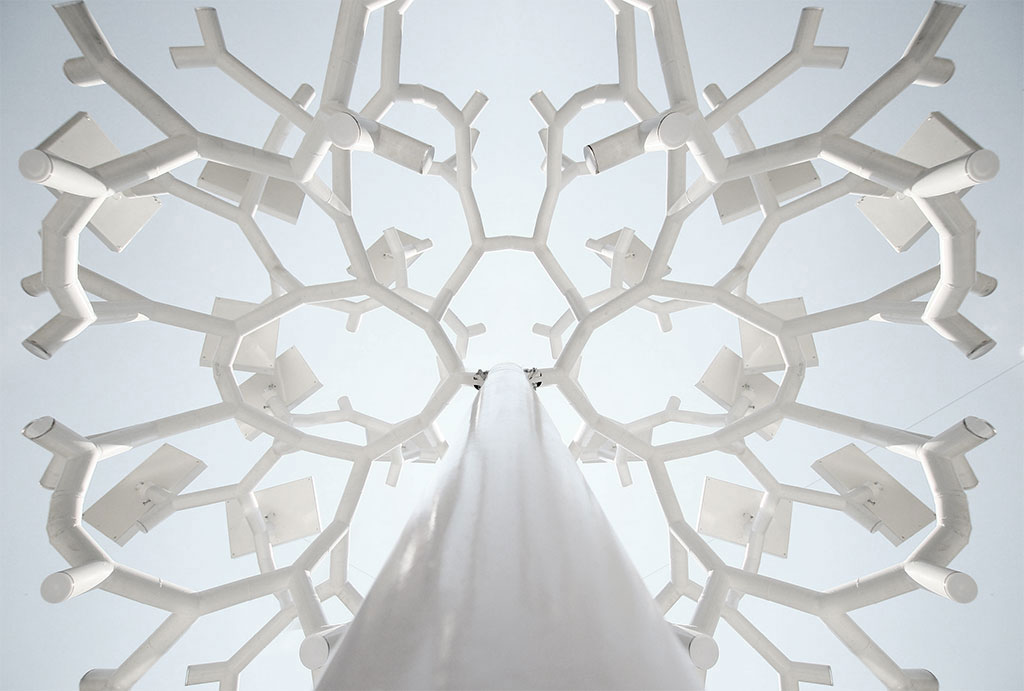 an attempt to copy nature

Amid four billions years evolution has sculpted nature’s original design into the most intelligent and efficient energy system known to humanity. Trees constantly convert sunlight into chemical energy on the surface of the Earth. We simulated the process of photosynthesis with an adaptable arboreal design tailored in an earthy manner for an urban environment. The structure of the VTree is the tree itself verging on the innate modularity of natural tree branches.

Amid four billions years evolution has sculpted nature’s original design into the most intelligent and efficient energy system known to humanity. Trees constantly convert sunlight into chemical energy on the surface of the Earth. We simulated the process of photosynthesis with an adaptable arboreal design tailored in an earthy manner for an urban environment. The structure of the VTree is the tree itself verging on the innate modularity of natural tree branches. Similarly to trees’ functionality in nature, VTree becomes useful in an urban space. VTree is in itself a gadget charger, Wi-Fi hotspot, and meeting spot with nightlight and CCTV. The world of tomorrow is fast-paced and ever changing. The energy sources society relies on currently are scarce and perishable. Finite carbon based fuel cannot respond to the society’s thriving need for energy. The sun has always played a prominent role in our culture and mythology. We owe our entire existence to this celestial giant and it has been a parent to us since the dawn of time. It is time we go back to our roots and look to the sun in search of our brighter tomorrow. Solar energy is a one of the most economically potent forms of renewable energy we have. Today more than ever solar power can bring significant economic prosperity and new growth to communities everywhere. VTree not only produces solar energy for itself, but it gives back to the grid all the while helping you stay charged and connected. Furthemore, VTree is fully equipped to continue providing solar energy during unfortunate cataclysmic events. 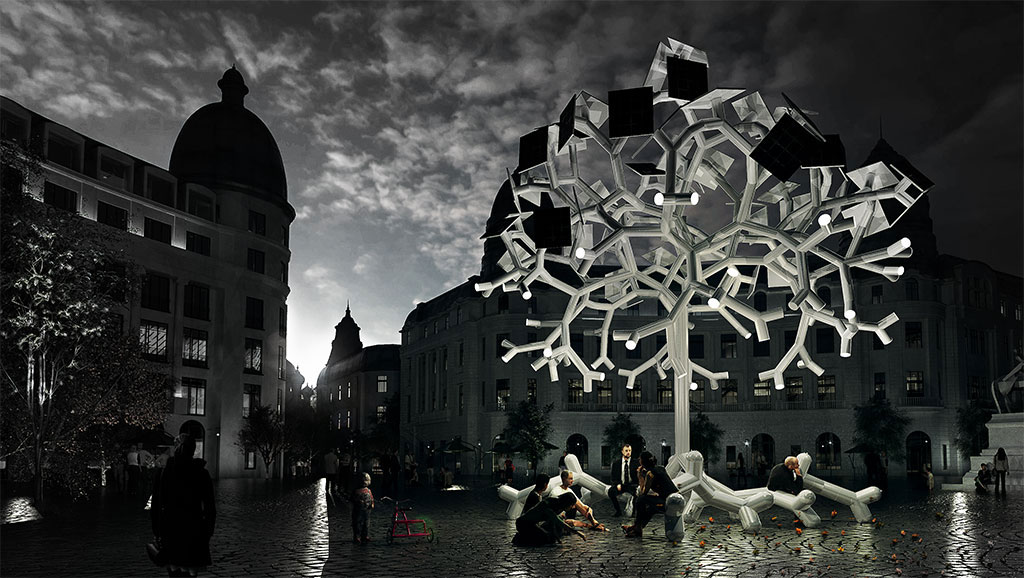 The Fractal Vtree not only mimics the aspect of a natural tree, but it is also designed based on the same fractal algorithm which naturally occurs in tree development. The world around us is full of fractals, from plants and frost crystals to our very own DNA. This algorithm is formed by repeating the same module continuing previous modules. We generated this algorithm using parametric design software in order to render it as true to natural occurance as possible. 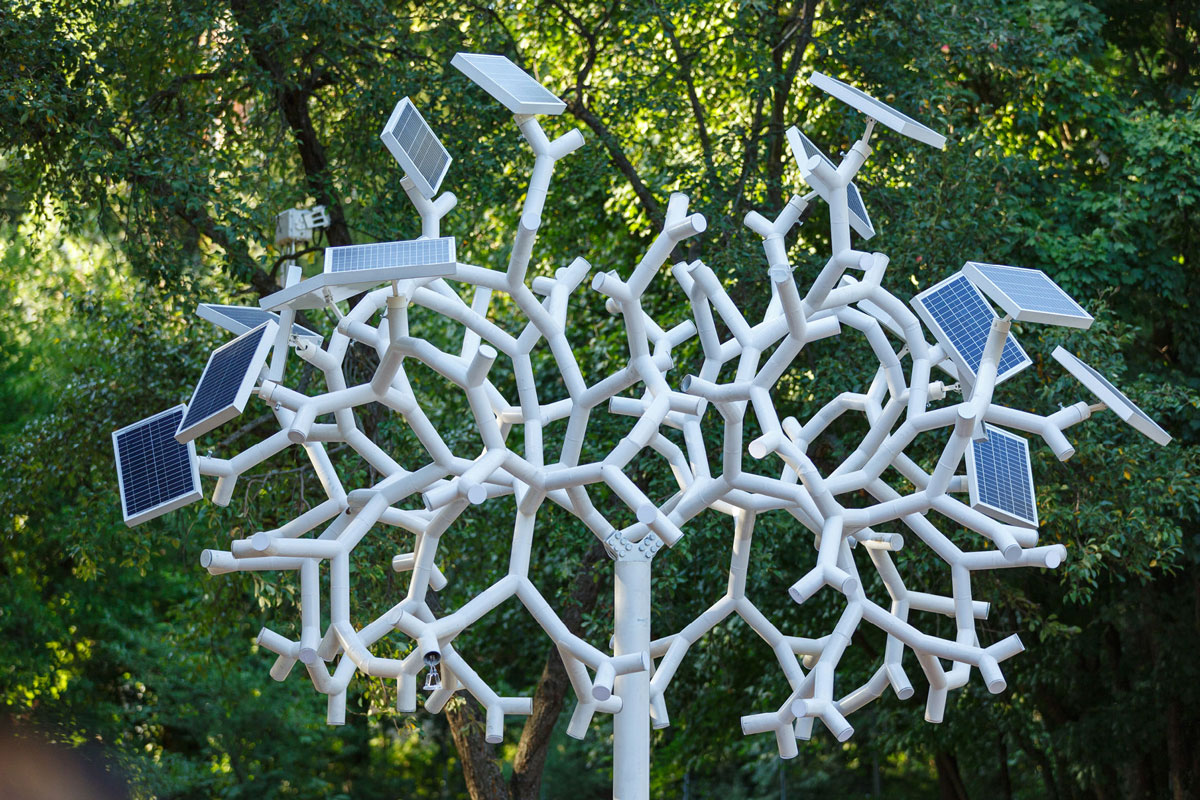 The use of nonrenewable energy sources pollutes the environment and degrade the planet we call home. Earth is the only planet known to support life, yet carbon based fuel burdens it with fast deterioration. Air, water, and land pollution, global warming, the hole in the ozone layer are all happening fast and irreversibly. Solar energy can help reduce our carbon footprint and one day even sustain energy requirements for life as we know it. For the time being, solar power is the healthiest alternative we have for our planet. VTree does not only supply renewable energy, it also requires little maintenance and it produces absolutely no emissions.
In more than one way VTree is a modern day, next generation energetic solution to the problems of tomorrow. Through function and aesthetics our solar tree enriches both personal and societal life and is available today.
VTree is a socializing interactive installation which provides an urban pulse in a world where we have grown distant. 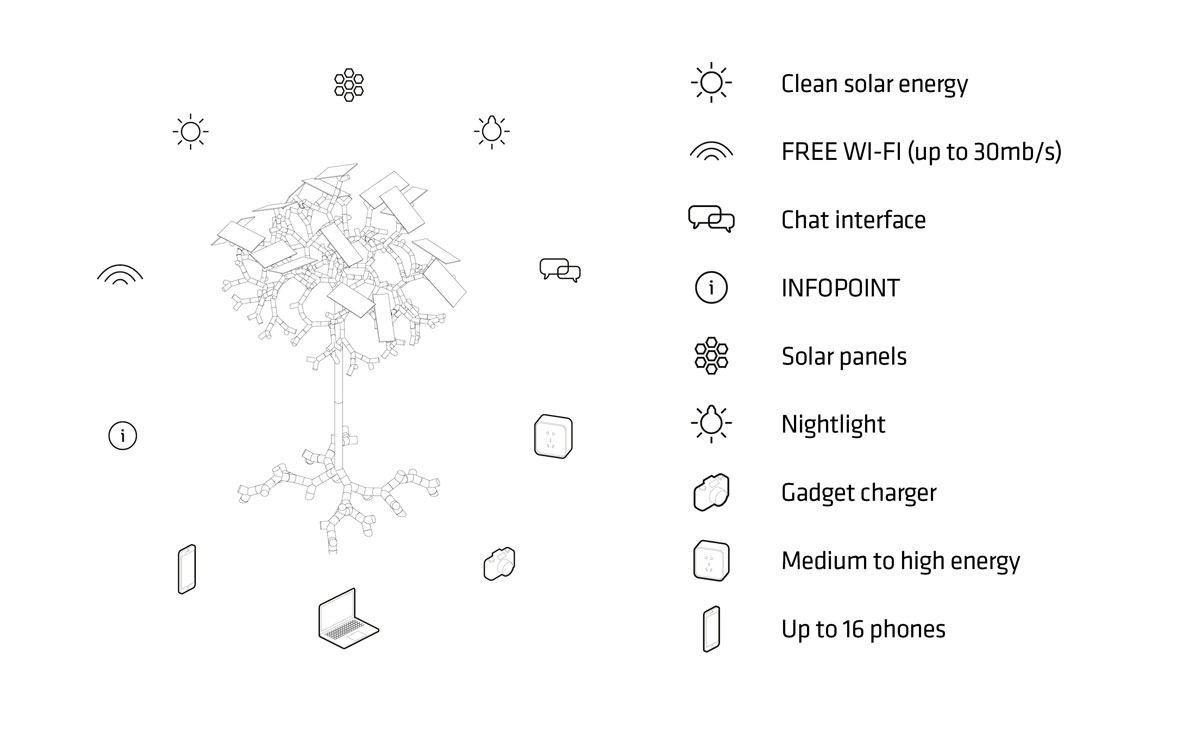 Point of view of ADMINISTRATIVE: Fit for large open spaces the Fractal VTree brings new shape and form to communal space. It engages both the aesthetic and the functionality of a public square, hightens social interactions, improves municipal production of energy, and brings your city a step closer to its inhabitants in the world of today. 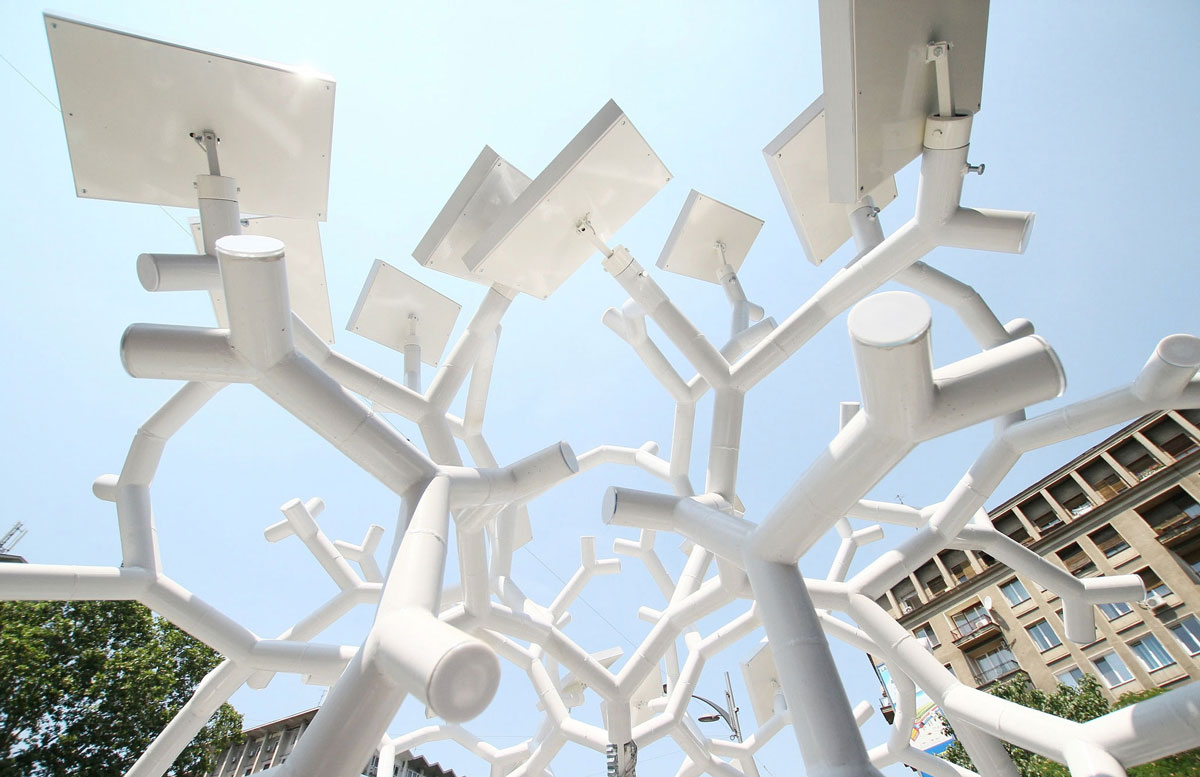 The Fractal VTree has a medium to high energy producing capacity and can make shift between a gadget charger, an electric car charging station and it gives back to the city’s electrical grid. During nighttime this solar tree stocks up energy and illuminates its surrounding area making it safer and more socially accessible.
The high-end design of this massive solar tree remains true to the social purpose of trees in small communities and can easily become an iconic meeting spot. It offers electricity, Wi-Fi, shade, and a place to sit back and enjoy the natural pulse of the city. Tourists can also benefit from this solar tree as an info point or a place to recharge their batteries after a long day.
The Fractal VTree is adaptable to the place where it takes root. It can furnish a small playground or a large square depending on the size you choose. 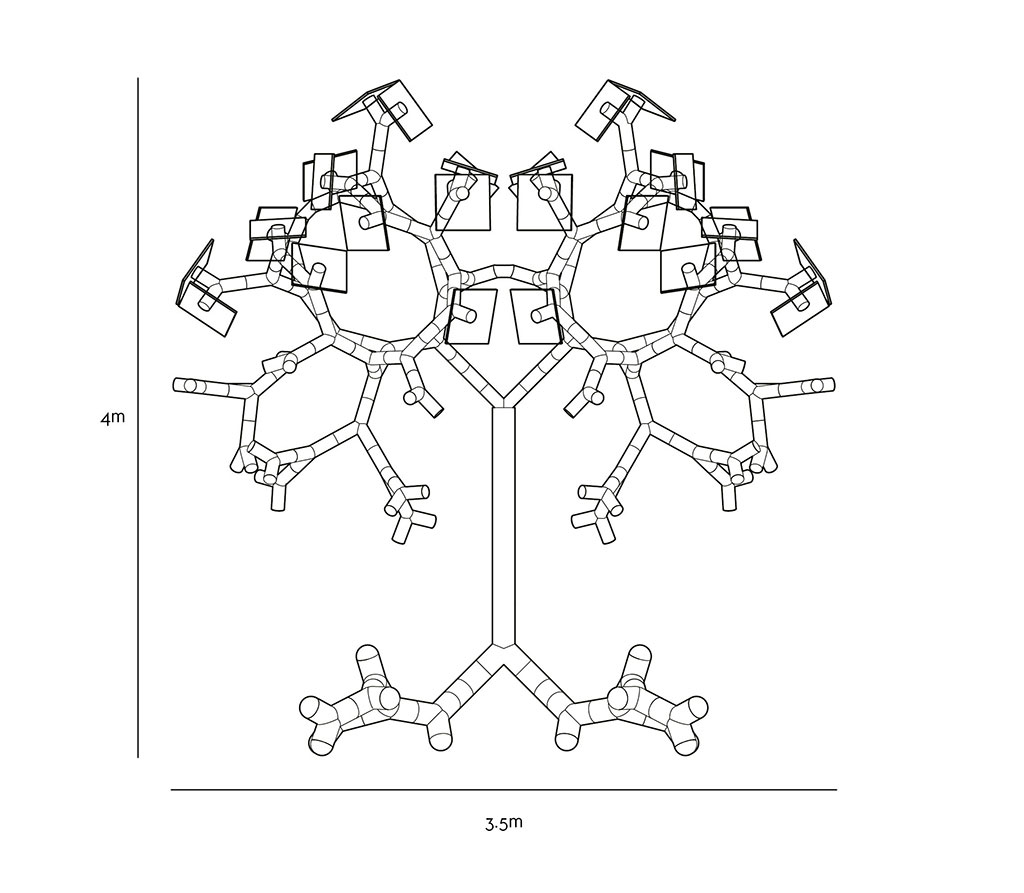 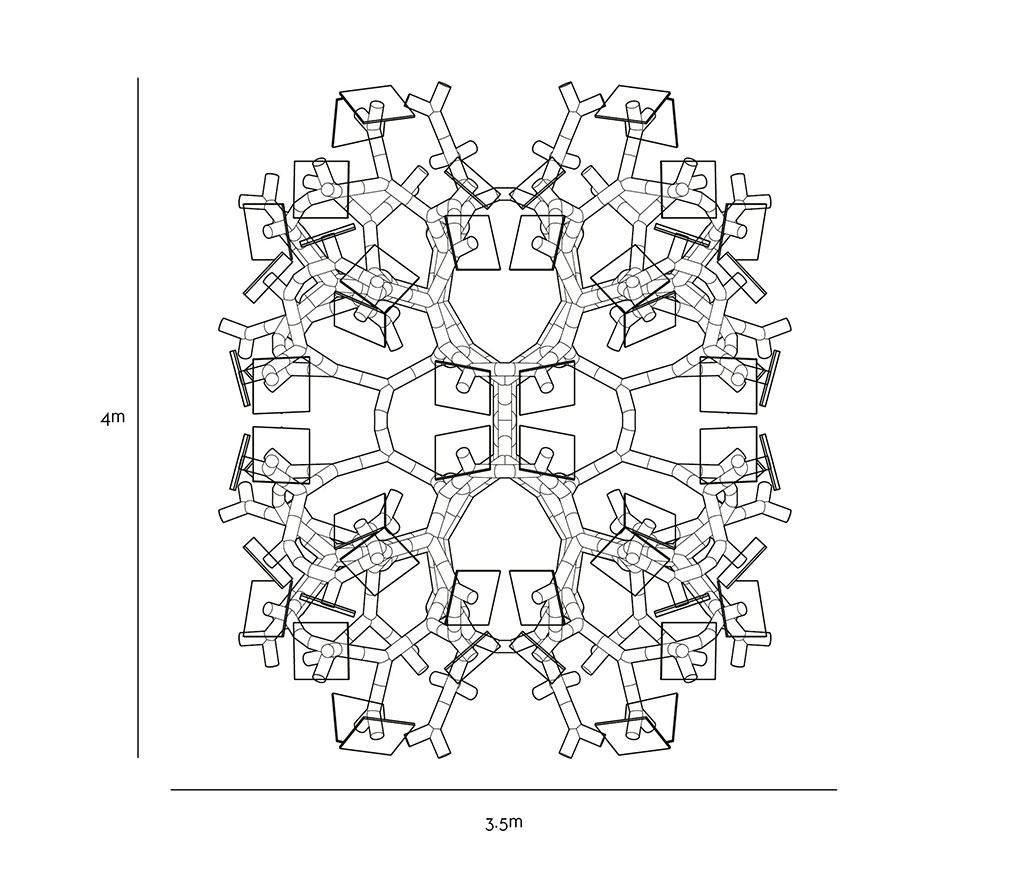 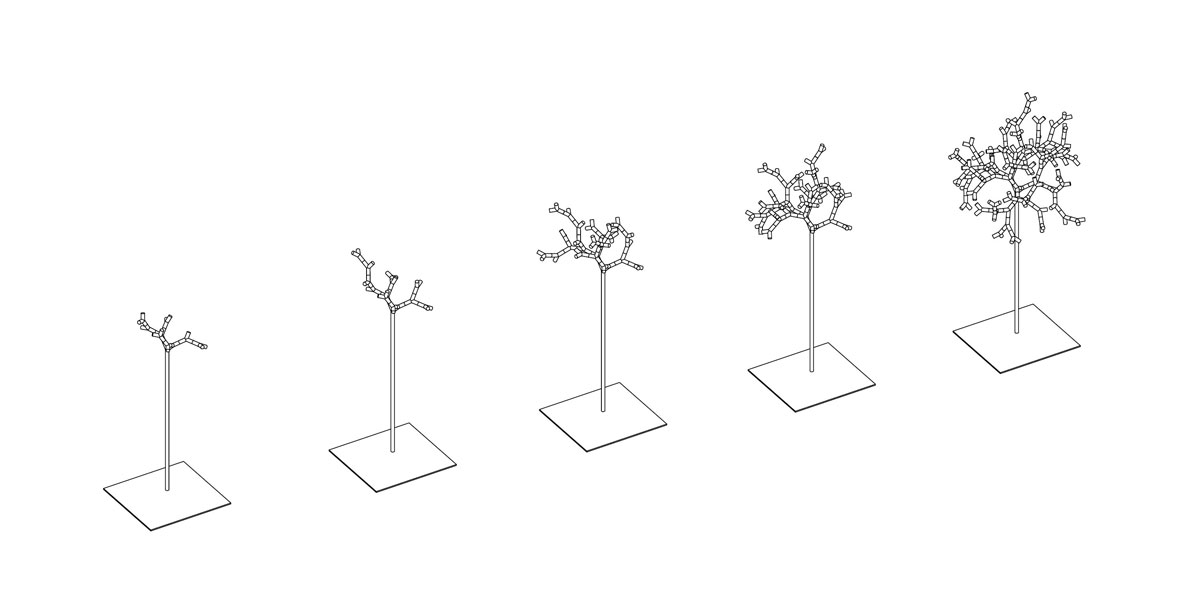 Being designed with special care for modularity and customization Vtree adapts itself to our clients’ needs and requirements. You can opt for a smaller version or a larger growth in one area of the tree depending of the sunlight direction or the space you wish to place this socializing interactive installation.